Darrell Skaggs was in the military, drafted in the U.S. Army in 1970 during the Vietnam War. He spent three years of active duty in Germany.

He was gritty. Brave. Manly.

Skaggs went on to work in the security field. His job was to be a protector, to take down bad.

He was brawny. Macho. Stalwart.

“I always thought of myself as a tough guy,” says Skaggs, 66. “One of those manly guys.”

So what happened seven years ago was something Skaggs never in his life would have imagined.

He was at the emergency department of IU Health West Hospital having issues with his gall bladder. A CT scan was done. The doctor came into the room.

“Darrell, I don’t want to alarm you, but I found a mass in your left breast.”

Days later, after a mammogram, an ultrasound and then a biopsy of the mass that was about the size of a quarter, Skaggs got the results: Stage 2 breast cancer. 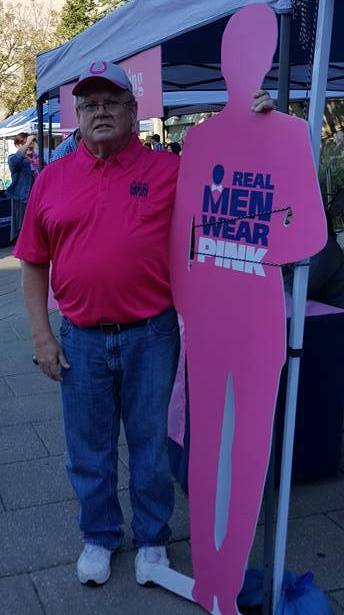 “This kind of thing didn’t happen to men,” Skaggs says. “Being told you have breast cancer, what in the world is that all about? It was embarrassing for me.”

But then, Skaggs got to thinking. His diagnosis was so much bigger than a tough guy’s ego.

“You need to tell men,” says Skaggs, of Brownsburg, “because men are dying of this.”

And that’s when Skaggs decided to open up and not worry about anything other than helping others.

Each year, more than 252,000 women in the United States are diagnosed with breast cancer and more than 40,500 die. That gets a lot of attention, a lot of press.

For men, just 2,470 are diagnosed annually and 460 die. Very few men ever think about it happening to them.

Breast cancer in men is usually detected as a hard lump underneath the nipple and areola. Men carry a higher mortality than women do, because they are less likely to assume it is breast cancer and seek treatment right away.

Skaggs, who was 59 at the time, never had any symptoms. He never felt a lump. He was lucky his gall bladder was giving him trouble or his breast cancer may never have been found.

And even after the mass was discovered, “I really didn’t think it was going to be anything,” Skaggs says.

He’ll never forget the day when he found out it was.

The call came while Skaggs was at work — from the doctor. It was breast cancer. 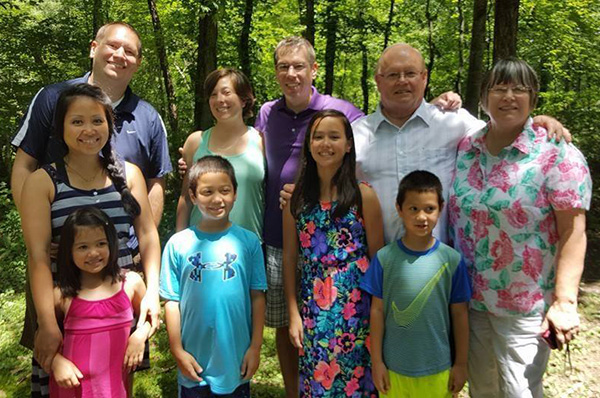 “I’m stunned,” says Skaggs, who is married to Wanda and has two grown sons and four grandchildren. “I’m like, ‘Whoa, this can’t be happening to me.”

That was at noon. Skaggs ended up at home, but doesn’t remember how he got there. His mind was racing; everything was a blur. His wife didn’t get off work until 5 and he didn’t want to tell her over the phone.

So, Skaggs sat in his house alone. He sat there for hours. Wanda walked in and could see her husband was visibly upset.

“What’s wrong?” she asked him.

Of course, dying always enters the mind when a person hears the word cancer. Skaggs started researching for the best of the best.

He found Mary Kay Turner, M.D., a surgeon at IU Health. Within two days, he was in her office. On March 30, just 19 days after his diagnosis, Skaggs was having surgery at IU Health Methodist Hospital for breast cancer, gall bladder and a hernia.

The next day, the news wasn’t good. More cancer had been found in the lymph nodes. On April 9, Skaggs had another surgery.

After four rounds of chemotherapy and plenty of ups and downs, Skaggs’ youngest son talked his dad into telling his story.

Since then, he has been the face of a male breast cancer survivor, part of national breast cancer awareness campaigns and a support system for other men.

When the American Cancer Society gets a call from a man diagnosed with breast cancer, Skaggs reaches out to be a support. He’s talked to men all over the United States, from California to Minnesota to Indianapolis.

“They just like to hear somebody’s voice, another man’s voice, who’s had breast cancer,” Skaggs says. “God got me through this and he put me in this position to be able to tell other men and support them.”

His biggest piece of advice to men is that if they feel any soreness or tenderness or anything unusual on their breasts, get it checked out.

“Men do get this,” Skaggs says. “They do get breast cancer.”