When he rang the bell inside the IU Simon Cancer Center seven months ago, Joseluis Gonzalez, 20, was celebrating his last chemotherapy infusion. As he rings in a new year, Gonzalez looks forward to life marked by a full recovery. 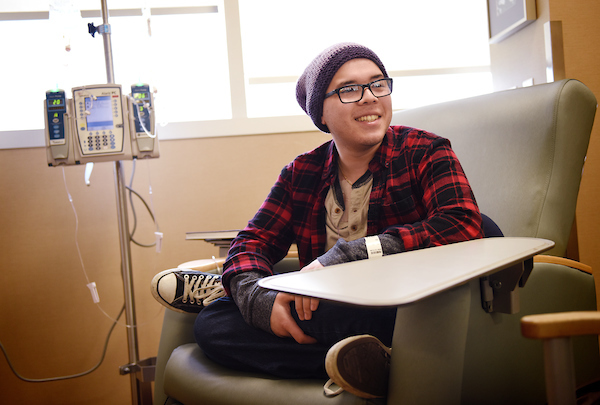 At the age of 19 he was diagnosed with testicular cancer. On May 10, 2017, the day after his last college final of the semester, Gonzalez underwent surgery to remove a tumor and two weeks later he started chemotherapy. Under the treatment of IU Health University Hospital urologist Timothy Masterson and oncologist Costantine Albany, Gonzalez has completed two surgeries and three chemo cycles in seven months.

After his final treatment he said, “Cancer doesn’t have to be news that means it’s the end of the world.”

Today he says he is working his way back to the familiar routine he knew before his diagnosis. He has returned to college – studying toward a degree in criminal justice and working regular shifts at Duluth Trading Company. And he is focusing heavily on a talent that helped him navigate his treatment – he chronicled his cancer journey through animated sketches. 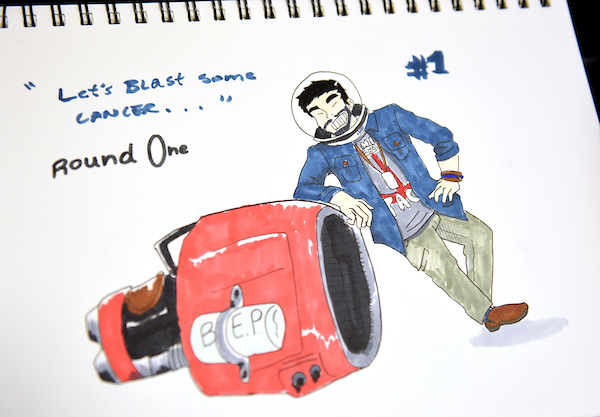 “I have relied heavily on my artwork with a better and more focused direction than before,” said Gonzalez, a 2015 graduate of New Palestine High School. Using pen and ink and some paints, he has told his story from beginning to end. One of the latest designs is a tribute to testicular cancer survivorship – a design he wears proudly on the back of a jacket.

“I learned a few things and one of the greatest is that life is too short for a person to focus on anger. I also learned that no matter what the situation is, if you are surrounded by one good person and you are doing what you enjoy most, it feels like things go by faster and you’ve accomplished more than you intended,” said Gonzalez.

“My Zodiac sign is an ox and I know that there were times I was tired, hurt and felt the weight, but like an ox, I kept moving forward.”