On the first day of February, the temperatures were a little above normal in Central Indiana and Rhonda Jones, 50, was already planning a beach vacation. But life changed when she learned she had breast cancer. 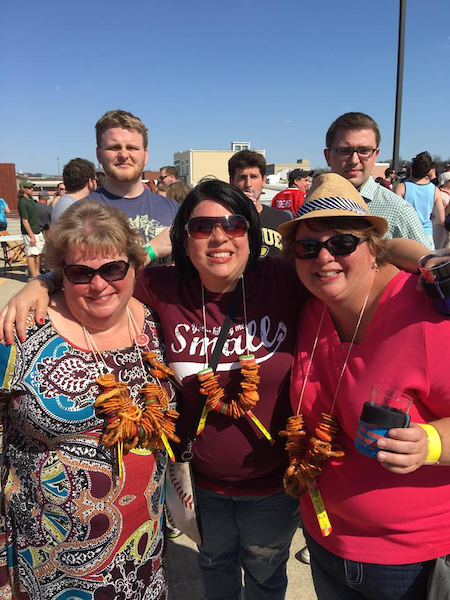 On a date marked in the history books by the French Revolutionary War, Jones started her own war. She began her fight against breast cancer.

“I can not describe the feelings you go through and I hope you never have to learn,” she wrote in her online journal. “I am sure I am still learning.” Ten more tests and numerous doctor appointments revealed three cancer spots, including one in her lymph nodes. Her enemy was considered Stage 3 by her oncologist Dr. Vijaya Kakani.

“I have a working brain and heart. Now I just need courage,” she wrote. She underwent four rounds of heavy chemo in eight weeks, followed by 12 rounds of chemo every week. A full mastectomy was scheduled for July (but was later delayed to August) followed by 30-35 days of radiation.

“The cancer is aggressive. It is a triple negative so the doctor’s are being aggressive. The good news is it is curable. After the 2-3 year mark, there is little to no chance it will reoccur. And we shall celebrate. I am in good hands with the great doctors at IU Health Arnett. I also work with a great bunch of ladies who will take good care of me. I may be getting a little VIP treatment,” she wrote in February.

At the start of her journey, Jones apologized to friends for updating them through social media, describing the posts as “impersonal.” But friends responded with encouragement. One friend, who had also battled breast cancer, wrote: “You are in for a journey and it is a roller coaster ride.” Pictures show the progression of Jones losing her hair, wearing a silly hat on St. Patrick’s Day and with friends all wearing headbands to show unity.

As she started chemo, Jones wrote: “When people ask what it feels like to get chemo I liken it to getting the flu or a sinus infection. On chemo day they pump all these fluids into you. Some to help; some to kill. You feel off because your body is trying to figure out how to react. You are tired. Things don’t taste great. Then on Friday you are superwoman – high on steroids. Saturday you just wish the flu would decide which way it is going. Sunday you feel the truck approaching. Monday through Wednesday you gradually feel better, then it starts all over again.”

By mid-March, Jones began to lose her hair. It was a time she knew would come but somehow wasn’t sure how to reconcile in her mind. So she began to think about hair as it relates to a woman’s persona. 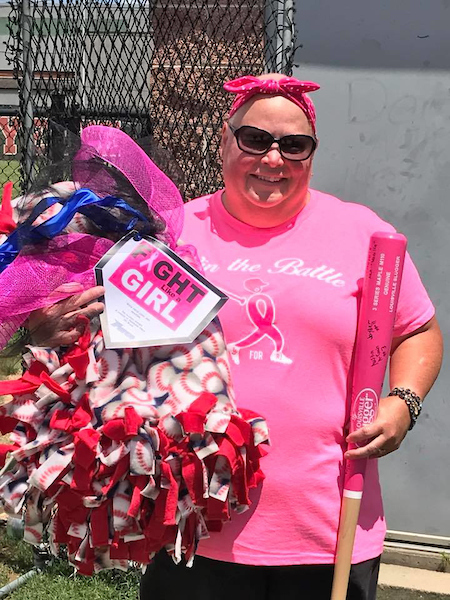 “Lets talk about hair. Our society certainly places a lot of emphasis on hair, especially women,” she wrote. “Every other commercial is about hair products that will make yours so much better. I have always hated my hair. It is super fine and thin. . . My best friend had long hair and had beautiful ponytails and pigtails. I was so jealous. When I got the chance to grow it out, I did. And I spent my money from babysitting to go to a real hairdresser. . . My hair has been super short and it’s been long. It has been curly and flat. I have spent tons of money to make it cute. . .  It has been many colors – mostly to cover the gray. So when you hate your hair why is it so hard to loose it? I didn’t think it would be, but I am not going to lie – it is difficult. Every morning clumps in the shower, clumps in the comb, shedding on your towel, your pillow, your clothes.” In the end, Jones’ husband of 22 years, Chris Jones, helped her shave her head.

Afterward she wrote: “It was the best decision ever.”

At about the same time, she had her third round of chemo, couldn’t keep any food down, and lost about 10 pounds.

“My stomach sounds like a transformer movie. I am getting stronger everyday thankfully. Other than the stomach explosions,” she wrote. She completed her fourth and final round of chemo on April 6 and reported the tumor was down to 1.5 centimeters.

Throughout her treatment, Jones continued working – sometimes shortening her days – and even won the Presidential Cup at the American Advertising Awards ceremony in Tippecanoe County.

Cancer is unpredictable and sometimes the strategies to fight it are also unpredictable. In late April, Jones learned her treatment schedule would be lengthened and the fall break beach vacation she was planning would need to be postponed. Surgery was pushed back to August 10  – her birthday. Thirty-five days of radiation began this month  – nine months after her diagnosis. She hopes she will be finished by Thanksgiving.

“I was just really getting excited about that beach vacation. But I will be surrounded by my family during the holidays, which always brings joy to my heart. We will look at a beach vacation for spring break 2018,” she wrote when she learned the news.

On May 4 with the second round of chemo complete and 10 more to go, Jones wrote about side effects – dizziness, blurred vision, nausea, leg cramps, and lack of sleep.

“Let’s talk about sleep – I miss it. I am a great sleeper, just ask my family. I used to be average 6-7 hours during the week and 8 on weekends. Those days are gone. Yes, I am tired. My body is physically spent. But sleep? Maybe 2-3 hours at a time. I have become an old man. I go to bed exhausted. I sleep. Covers on, covers off, repeat.”

She also realized she was becoming forgetful: “Chemo brain is a real thing. It reminds me of being pregnant. I think of so many things I need to do then cannot remember. I make a lot of lists now. Concentrating is hard sometimes.” 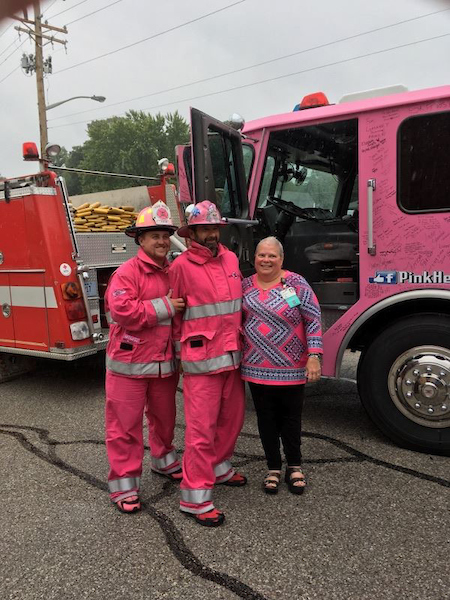 As she faced the rainy days of spring, Jones wrote of blooming flowers, preparing her deck for warm weather and baseball. Her 12-year-old son plays on a traveling team.

For inspiration, she began wearing a keepsake diamond ring. The ring belonged to her grandmother and was handed down to her mother and then to Jones.

She put the ring on the day of her first treatment and has worn it every day since. “I get strength from the two women before me – who both survived cancer. I know they are helping me through this journey. Every day I see my angels and know I’ve got this,” she wrote. Her mom was diagnosed with uterine cancer at 35 and her grandmother battled ovarian cancer.

It was the strength she needed as she faced surgery on August 14 – a radical mastectomy, removing lymph nodes that later tested cancer free. On her last doctor visit, her oncologist prescribed oral chemo.

“I am disappointed. I am tired of being exhausted. I am tired of being the weakest link. I hate feeling like I am 100 years old. I am not good at letting others help me,” said Jones. But then she added: “Never fear. Tomorrow is a new day. I will get up put a smile on my face and have a great day. I am expecting one hell of a party in 2018.”