It was incredibly terrifying territory. But for every fear that arose, the excitement and hope and marvel crept in to take over.

The year was 1982 and IU Health Methodist Hospital was ready to make history. It had a team, a dedicated team made up of only the best of the best – ready to perform Indiana’s first heart transplant.

On that team was nurse Donna Ennis, who remembers the sheer intensity of that time. She remembers gowning up to go into Annie Gardner’s room. She remembers wiping down the walls of her room all throughout the day.

Gardner, a 38-year-old mother with familial cardiomyopathy, was weak, susceptible to infection and germs. She had a failing heart that doctors said had, at most, 12 more months of life. 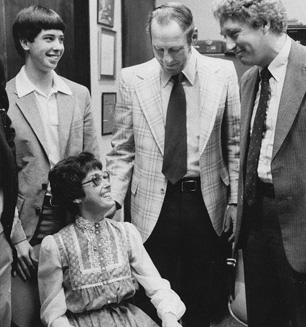 “We were truly involved with some pioneers of the time,” says Ennis, now manager of thoracic transplant services at Methodist. “We had teams there around the clock. It was all so new and very exciting.”

After 45 years at Methodist Hospital, the first 29 as a bedside nurse, Ennis has seen a lot. A lot of firsts. A lot of lasts. And a lot that has changed.

But, what’s been most important to Ennis has never changed.

“What it’s all about, it’s about making a difference in lives,” she says. “About making the patients’ lives better.”

With a successful heart transplant performed by Dr. Harold Halbrook, and then a second transplant years later, Gardner went on to live 25 more years.

She saw her son graduate high school. She enjoyed water skiing. She became a precinct committeewoman. She participated in at least five World Transplant Games.

“She was such a remarkable woman,” Ennis says, “and an advocate for transplant at Methodist.”

And then, six years later, Ennis was there for another Indiana transplant first.

She was a nurse on the team for John Robert Wrancher, when the 39-year-old father of two young sons received Indiana’s first liver transplant in 1988. That same day, University Hospital performed a liver transplant on a patient, as well.

“To go back and see where we were then in the field of transplant and in caring for someone and going through that to see where we’ve progressed now, it’s amazing,” Ennis says. “We just have such a stellar transplant program.”

And Ennis was there overseeing all those transplants at Methodist. She was doing it in her role in management — but with the heart of a bedside nurse.

Growing up in Indianapolis, Ennis had dreams of being a teacher. In high school, she played volleyball, kickball, was class vice president and in National Honor Society.

Academics were top priority in the Ennis household.

“My parents always encouraged us to go to college,” Ennis says. “Education was key growing up. That was most important.”

Ennis’ father spent 46 years with the Indianapolis Fire Department, part of that as chief. Her mother stayed at home until Ennis and her brother and sister had finished high school. Then, she went back to school to become a dental assistant.

One day, in high school, Ennis’ mother came to her and said something that changed her career path forever.

“She said, ‘Now Donna, you need to realize there aren’t a lot of teaching jobs out there,’” Ennis says. “She steered me toward nursing. I went into nursing and I loved it.”

Ennis graduated in 1972 with a nursing degree from Purdue University and then she landed a job at Methodist fresh out of school.

She started her career in labor and delivery and, after five years, moved to dialysis. From there, she transferred to cardiovascular critical care in the early 1980s. That’s when she cared for Gardner.

“I really loved that. The experience I gained there was incredible,” she says. “I just loved critical care. I just loved the heart program.”

And she loved that heart transplant. Yes. Transplant was now in her blood.

Ennis’ first job in transplant was as a kidney transplant coordinator. Then, when Methodist started its liver transplant program, she landed on that team.

She loved the continuum of care, being with patients before transplant, getting to know their families and then, after transplant, being there to care for them and following them for life.

In 2001, Ennis took on her management position. While it’s not bedside, and not hands-on patient care, Ennis is still touching patients’ lives every day.

“She is a true patient advocate,” says Michele Spencer, customer relationship manager and living donor advocate for transplant, IU Health University Hospital. “She always puts the patient first above everything else.”

Personal: Ennis has two grown children, a son and a daughter, and five grandchildren. She is recently widowed from her husband of 28 years.

Hobbies: Ennis lives on Morse Reservoir and loves lake activities — swimming, boating, kayaking, fishing and watching the sunsets. She also likes to shade garden and has a large flower garden. Ennis has two 5-year-old yellow labs, is involved with her church and likes to support Indiana college basketball, especially IU. She is a lifelong Indianapolis Colts fan, having attended almost every home game since the team came to the city in 1984. Her greatest joy is spending time with her grandkids.

Extras: In 1998, Ennis earned a second degree from IU Kelley School of Business. Through the years, she has been very involved with NATCO (North American Transplant Coordinators Organization), as a member and in leadership roles.

Retirement? “Maybe a few more years,” she says. “I’m not ready. I enjoy my job.”