“You can do whatever you want Raghu. You can be anything you want.”

Born in Bangalore, a city in south India about five times the size of Indianapolis, Raghu Motaganahalli, M.D., grew up thinking he wanted to be a civil engineer – building bridges and dams. That was his dream.

But after sustaining some trauma in high school and consulting with a surgeon, Dr. Motaganahalli had a revelation.

“These guys are different than I thought,” he said to himself. “And at that point, I made my decision. I want to become a surgeon.”

A surgeon he became — but not just any surgeon. Dr. Motaganahalli trained around the world, training so extensively that he can practice anywhere on the globe.

His ultimate choice to settle for a career, lucky for IU Health, is as medical director of the vascular surgery department at Methodist Hospital.

Here, he leads a team of renowned surgeons and a program ranked among the top in the nation. Dr. Motaganahalli is one of just 2,800 vascular surgeons in the United States. It’s a specialized field and one often confused with cardiovascular or cardiac surgery.

Dr. Motaganahalli explains it this way: “Vascular surgeons deal with every artery in the body, every vein in the body — except for the heart and the brain.”

“I don’t work on the pump. I work on the tubes,” says the 48-year-old father of two sons. “I call myself the plumber.” 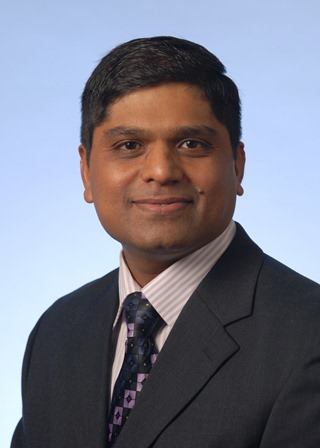 His work with aortic aneurysms and lower extremity ischemia is critical. In many instances, his patients don’t have much time to get to surgery before the risk of death.

Yet, Dr. Motaganahalli sees his specialty as one of positives.

“My job is to get them back on their feet,” he says. “To give them the quality of life. I went to medical school to become a surgeon, to help people and I never let it go.”

In addition to his clinical work and research, Dr. Motaganahalli takes a deep interest in molding young residents.

“It’s important to train the next generation in the proper fashion,” he says.

After all, Dr. Motaganahalli experienced a lot of amazing training and mentors on his own medical journey.

After graduating from high school in India, Dr. Motaganahalli received his medical degree from Bangalore University. He then completed his surgery residency at St. John’s National Academy of Health Sciences.

What followed was a globe-trotting jaunt that first took him to Buenos Aires. There, he trained with Juan C. Parodi, the surgeon who in 1990 had performed the first endovascular abdominal aortic aneurysm repair using a stent.

Dr. Motaganahalli spent six months with him, learning to speak Spanish best he could.

Next, he landed in Germany on a surgical society scholarship, studying in Berlin and at the University of Dusseldorf to learn the details of catheterization technology.

Dr. Motaganahalli also received training in the United Kingdom in Ireland. He was a senior lecturer of vascular surgery in Dublin.

But then, after taking a deep breath and thinking about his whirlwind trip, Dr. Motaganahalli had a thought.

But, there was one last destination he had never reached and that was the United States.

“I thought I should get part of my training there so I can be complete,” he says.

A spot was open at St. Louis University Hospital in Missouri for a fellowship in vascular surgery. He got on faculty to fast track his residency.

And before he knew it, Dr. Motaganahalli had extraordinary standards — he had finished his surgery qualifications in India, America and the U.K.

“I can practice anywhere in the world right now,” he says.

What’s ironic is that Dr. Motaganahalli never had the dream of coming to the United States. He wanted to train in India and, at the time, thought the United Kingdom had the best surgical training.

“Now, I have a different perspective,” he says. “U.S. trained surgeons are the best absolutely in the world.”

Still, Dr. Motaganahalli has a special place in his heart for that first general surgery exam he passed. It was right before his father died.

“My father got to see me clear that exam,” Dr. Motaganahalli says. “He knew that and he was very happy.”

He father knew his words were right. His son could do anything he wanted.

Personal: He and his wife, Dipti, live in Carmel and are the parents of two sons, a sophomore in high school and a fourth grader.

Research interests: Use of endovascular surgery for the treatment of CAS, aortic aneurysm, lower extremity ischemia and vascular trauma and the use of thermotherapy for intermittent claudication.

On IU Health: “This is my home now. I like the department. The division gave me a lot. They gave me the flexibility, the opportunity and, more than anything, they nurtured me. My boss Dr. (Michael) Dalsing pushed me past what I wanted to do.”