The warm glow of an electric fireplace, a red and white coverlet casually draped over the back of a chair, and various black and white photos cast an air of warmth in the office of Joyce Hamon. It’s sort of like visiting a private library.

Hamon uses this space in the seventh floor of Wile Hall to do what libraries do – collect, research, catalogue, and protect history. Hamon’s job may very well be one of the most prized in the IU Health hospital system.

She is a caretaker, not for patients, but for the behind-the-scenes props, people and publications of extraordinary patient care. 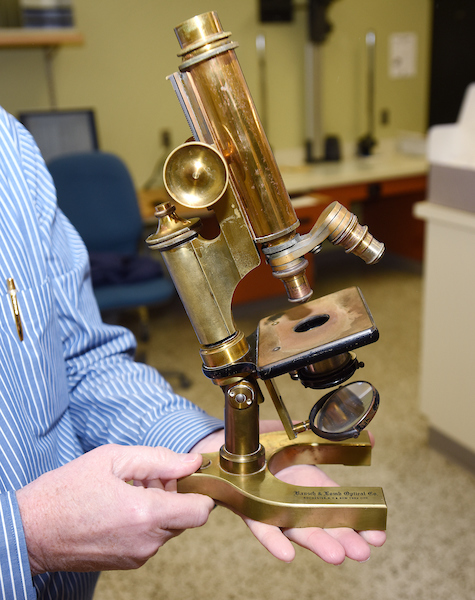 Imagine looking through the eye of a microscope once used by hospital researchers in 1894, or holding a glass syringe dating back to 1958. Those are only a couple of the hidden gems in the collection Hamon oversees as the coordinator and curator of the IU Health Archive Project.

“I’ve just always enjoyed history. I’m a bookworm. I love historical fiction and biographies. Ken Follett is a favorite author because he writes about history spanning back to medieval times,” said Hamon, who works on the archives project three days a week.

She didn’t always have a supplemental shift. She started at IU Health in April of 1988 working in the same building in human resources. In 1992 she moved into the role in the executive offices until she “retired” last year.

It was her role as the executive assistant to former IU Health President & CEO Daniel F. Evans, that jumpstarted the archive project.

The search for those historic board minutes sent Hamon on a scavenger hunt of sorts. In the process, 1,000 boxes of old records were located in an off-site storage unit. In time, the boxes were moved back to campus, a site was secured to begin sorting the contents, and collecting additional artifacts and literature, and as they say . . . the rest is history.

“The goal for this first year has been laying the groundwork for a real archives department,” said Hamon. “I feel like I’m a mile wide and an inch deep. It takes time to find space, and set things up so they make sense.” She took an 8-week online class, read lots of books, and took a few fieldtrips to visit other archival departments to learn the ropes. She also secured the help of a consultant and purchased software to help in cataloguing the research.

A historical timeline Hamon completed begins with July 20-23, 1899:  A convention surplus of $4,750 from the Methodist Episcopal Church International Convention of the Epworth League begins funding of Methodist Hospital. Other highlights of the hospital history include: The first Methodist Hospital Nursing School graduation in 1911; the dedication of James Whitcomb Riley Memorial Hospital for Children on Oct. 7, 1924; and the unveiling of the Methodist Hospital “Lighthouse of Health Beacon,” on Nov. 9, 1933. There are also pictures of the hospital’s first 19-bed intensive care unit, dated April 22, 1963, the new Indiana University Hospital, dated 1970, and the implantation of the first artificial heart dated July 8, 1987.

The photos and dates represent years of medical progress, and hours of work by Hamon. As she talks about all the sorting and settling of dust, Hamon enthusiastically shows off the storage area. It’s like a vault filled with national treasures.

Boxes and boxes of photos are organized by dates and relevance. Documents preserve pages of history – including hand-written board minutes, hospital newsletters, and keepsakes from the 50th, 75th, and 100th anniversaries of Methodist Hospital.

And then there are the artifacts – the treasures that take history buffs back in time to walk in someone else’s shoes – like the nursing cap designed by Nurse Jessie Bass, the first operating room supervisor in 1908. The caps were originally made in the hospital sewing room. Hamon stores the cap safely in a box wrapped in tissue paper like a china doll. Stored in other boxes are dolls created by the nursing class of 1938, depicting the history of nursing.

“I’ve learned so much from this project,” said Hamon, who hopes to have a large portion of the early Board minutes digitalized by next summer. But she knows that history takes on a life of its own and she is sure there will always be more to collect and catalogue.

“The more people hear about it, the more we collect. It’s like everyone has a piece of hospital history to share and that’s what makes it so interesting.”