He’s sitting there in his light blue polo with that smile — that huge, contagious smile. The smile that more often than not erupts into laughter.

Jim Rednour sees no use in being dismal – ever. Life’s too short. And so each day as he checks patients in at IU Health Methodist Hospital’s catheterization lab, he smiles and cracks jokes.

On this day, an elderly man walks up to the window. Rednour, the chief cath lab welcomer (officially a system patient access associate), asks for his name — and for a signature.

“I just need an autograph,” he says, as the man signs the paperwork. “We’re going to try to sell it on eBay.”

The man looks up almost in shock. He had seemed a little nervous. Now, he’s chuckling down to his core. Rednour laughs with him, then offers the man reading material, tells him to relax and sit down with his family.

In other offices, patients sit in front of the person typing on a computer while they are registered.

“My philosophy is, ‘Do they want to sit here staring at me working on a computer when they could be with their family?’” Rednour says. “No, they don’t.”

Rednour registers them, and then walks out to the waiting room to put on their wristbands.

“I try to think if this was my family here,” he says, “how I would want them to be treated.”

After a nearly two-decade career in the phone industry, Rednour went to work for a temp agency 18 years ago.

He was given a choice of three jobs. The first: Sit in a corner and do numbers, no contact with people, but great pay. The second: A mid-level income job. Or the third: Transport patients in wheelchairs at a hospital. It was the lowest paying job. 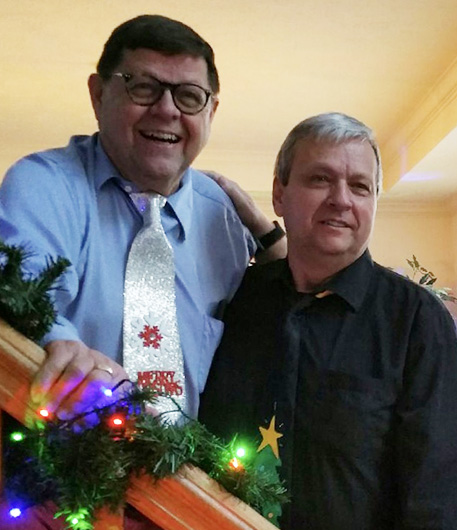 So, 18 years ago, Rednour came to Methodist and he did love it. He loved connecting with patients, being a bright spot in their day. And learning the landscape.

“I know all the little nooks and crannies all over the hospital thank you very much,” says Rednour, an openly gay male in a long-term relationship, who serves on IU Health’s diversity panel.

Rednour did his job so well at Methodist, he quickly landed a full-time job. He has worked as a transporter, a unit secretary, in pre-admission and, for the past eight years, checking patients in at the cath lab.

“The thing that makes it perfect is I’ve had three catheterizations on my heart,” he says. “I’m the guy who has been there done that. I can’t tell you about the medical jargon, but I can tell you how it feels, how it’s going to impact you emotionally.”

Rednour is attuned to his patients’ feelings. He truly cares, says Jim Porter, patient flow coordinator at the cath lab. And he cares about anyone who walks into the lab, even if they’re not his patients.

“Jim doesn’t let them go any further than this door without them knowing exactly where they need to be next,” Porter says. “Jim will make phone calls and find out where they are supposed to be.”

Rednour will even personally escort patients across the hospital to make sure they get to the right spot.

“Patients love that,” Porter says. “That’s really the standard of care that he gives. And he shows that same consideration to the patients here.”

For the regulars at the cath lab, Rednour has become a comforting sight. They know they need not worry when he is around.

Rednour says he thinks people appreciate that he is an open book.

“I do make myself known. I talk about my partner. People do like the idea that I’m open about being gay at my age when I had to struggle so much to get here,” he says. “That’s really all it’s about with anything – just truly being yourself.”