The dust rained down like confetti, or maybe it was like lava sprouting from a volcano. Denise Woods describes the horrific scene outside the World Trade Center – grasping for words to paint the picture. Unlike confetti, there were no colors. It was dark, like gray or black.

And the sounds – there were screams. And the smells – like something burning.

But what she remembers the most is a path – like a passage that opened up in front of her and drew her far away from the devastation in Lower Manhattan. It wasn’t a clear path. It was foggy and there was temptation to turn back, to look back, but something kept her moving forward. She was still in her work clothes, including high-heeled shoes, and was carrying a few personal belongings she picked up from her office before leaving the building.

As she exited the building, she remembers seeing her supervisor and another coworker lingering in the office space. She began to descend the 92 floors, step by step. She remembers walking onto the seventy-second floor where the elevators were not working, and hearing the news – tower one was hit, her tower was safe. The elevators were then put into motion. She joined more than a dozen people who took the second elevator to the main lobby. As the doors closed, she saw one of the last people she knew. Woods hoped the coworker would join them on the elevator but she didn’t.

She was about 100 feet outside the building when the second plane hit.

“People were running and screaming. I started to run and someone said ‘stop.’ I didn’t run I walked. It was like someone said ‘don’t become part of the chaos.’ I got out of the building and I looked up and still wondered why two buildings were on fire?”

It wasn’t until she got home and turned on the news that she realized the Twin Towers had been the target of terrorist attacks. The attacks claimed the lives of 2,996 people and injured more than 6,000 people.

“I just kept moving forward by myself. It was like I was being ushered from the building. We lost close to 20 percent of our workforce. A lot of people who stayed closer to the towers were the ones who lost their lives. About 20 minutes after the impact, the building just started to tumble,” said Woods.

And like the path she took to escape one of the most horrific attacks in US History, Woods has been on course to rebuild her life. Within days after the attack, she unleashed her innermost thoughts and began writing about the experience. Over time, she published two anthologies: “9/11/01 God’s Unseen Miracles – Healing Through Poetry,” and “To the Hurting – God Massages the Heart on the Hour.”  She has also published another collection “A Mother’s Love.” The day she returned to her home, covered in ashes and dust, she also realized something else was happening in her life. 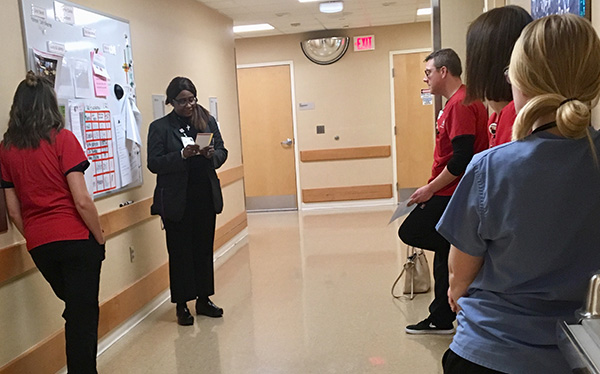 Born in British Guiana, part of the West Indies, Woods is a twin and one of six children raised by a successful mother who spent most of her working years as a teacher and school principal.

“I always tell people even though I had a lot of siblings I was a very compliant child – the peaceful one always picking up the slack because kids are kids. I always emulated my mom in every area,” said Woods. “And in the final analysis, I learned much from her – to cook and all the domestic chores. Around the age of nine I fell into the role of caregiver because mom was busy working as a high school principal and then taking care of my grandmother.”

Woods remembers that no matter how busy the weekdays were her mom expected the children to be in church on Sundays.

“I think even back then I was always soul searching and feeling like I was set apart for something special,” said Woods. She adds that her childhood was spent attending Catholic schools, climbing fruit trees in the backyard, joining her cousins helping her uncle in the rice fields and soaking up the sunshine and humidity – all part of her homeland.

Woods’ sister was the first to marry and move to the United States. Woods’ mother followed in 1983 and five years later, Woods joined her and eventually became a US citizen in October of 1998.

In the past 29 years she has obtained a bachelor’s degree in finance and a master’s degree in business administration and has worked primarily in insurance. She was working for the Aon Corp Insurance Co. as an insurance specialist when the World Trade Center was struck.

That all changed when she walked away from the dust and ruble.

“It was like until that point it was about the dollars and cents and a successful career. When I walked out of that path to safety, I raised my hand and said, ‘where do you want me, God?’” 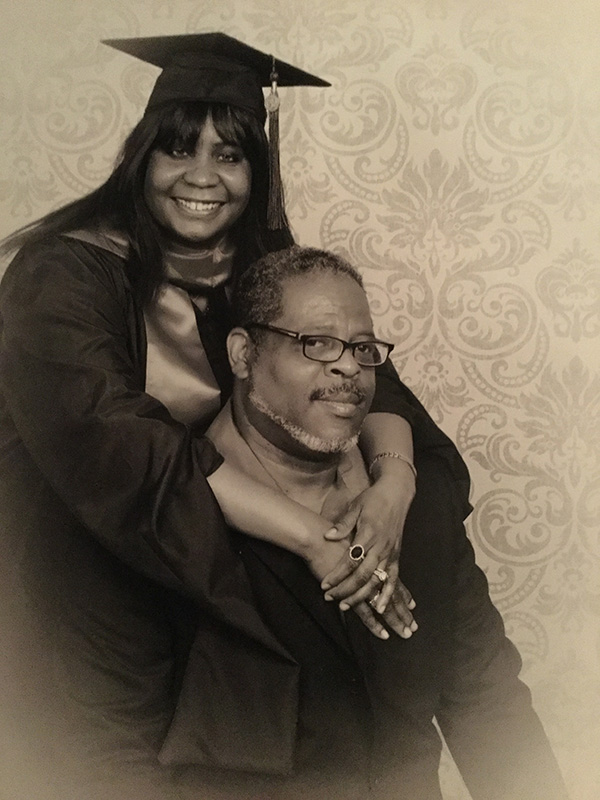 “We had a connection. We were both Christians and we just knew,” said Woods. Exactly 11 hours after their first meeting, Anthony proposed to Woods.

“I was a survivor of the 9/11/01 terrorist attack on the World Trade Center, and Anthony was at that time an active military personnel (Army) who was given his orders to go to war. Anthony, like thousands of American servicemen and servicewomen, was told that he would be going to Afghanistan, to fight in the ‘Operating Enduring Freedom (OEF), Afghanistan War. Anthony spent 288 days in the battlefield defending our Great Nation,” said Woods.

In 2015 she started the internship program at IU Health while completing her master’s in religion at Liberty Baptist Theological Seminary, graduating in 2017.  Last August she began her residency in pastoral care working at University Hospital during the week and at Riley Hospital for Children and Methodist Hospital on the weekends.

On a recent weekday she sat at the bedside of a patient hospitalized for side effects of cancer. She talked in a soft voice and then prayed for strength and healing. She then joined a group of nurses offering morning devotion.

“I think this is where I’m met to be – giving of myself,” said Woods. “It’s about being compassionate and caring. For so long I was focused on business and now I walk with people. It’s no longer about Denise; it’s about humanity and love for others.”