Drew Heydon isn’t sure how he got it. It may have been during pre-season practice when he went for a tackle, his helmet popped off and he ended up with a busted lip. The lip was stitched up in the locker room; he put his mouthpiece back in and headed to the field.

But nearly a month later, Heydon, then a senior defensive tackle on the Center Grove High School team, began to have back pain. At first it was bearable, then it got worse. 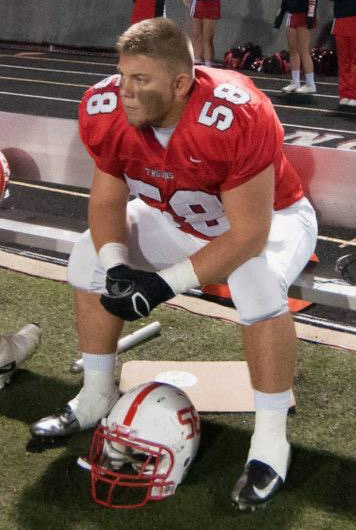 “I’d never missed a game my whole life so I pushed through practice, went home and went to bed,” said Heydon, who had played his favorite sport for 12 years.

As the pain grew worse, his parents took him to ER at a hospital near his Greenwood home. He was told he had kidney stones and was sent home with pain meds.

“I went home, drank as much water as possible and waited for the pain to pass,” said Heydon. But the pain only got worse. More test followed and he ended up at Methodist Hospital. The diagnosis: He had MRSA in his bloodstream.

Often referred to as the “Super Bug,” MRSA – Methicillin-resistant Staphylococcus aureus – is caused by a type of staph bacteria that is resistant to many antibiotics.

By the time he was admitted, Heydon, the son of Larry and Jodie Heydon, says he couldn’t raise his arm and his pain was at a level 10. He remembers having a needle inserted in his shoulder and back to drain softball-size pockets of pus.

“I had just turned 18. I felt like all this was being thrown on me. At first I was told I was going to be out of football for the rest of the season. It was my senior year and I was crushed, but that gave me all the more reason to focus on getting better,” said Heydon, who lost nearly 20 pounds in a week. “Here is a time when I usually put on weight for the season and instead I was losing it. I just knew I had to get better,” he said.

After seven days in the hospital, Heydon was released with a PICC line in his left arm where antibiotics were shot directly into his bloodstream.

“When I went home, my mom was basically my nurse. She continued to administer the antibiotics. It took me a month to get back into shape but I just kept thinking about getting back on the field, back with my team,” said Heydon. Oral antibiotics followed for three months, along with lab work. He remained off the field all of September.

“We appreciated the cardiology department who handled our anxiety with the testing of MRSA around Drew’s heart with much professionalism and compassion,” said Jodie Heydon. “We literally cried with joy when we were told that there were no issues.”

On October 5, the rain was pounding the field. It was the worst conditions Heydon had ever played in during his football career. But it was one of the happiest nights of his life.

The Center Grove Trojans faced off against the North Central Cardinals. Heydon was on the field again.

But it was the next week – senior night – that Heydon considers one of his best all-time high school memories. 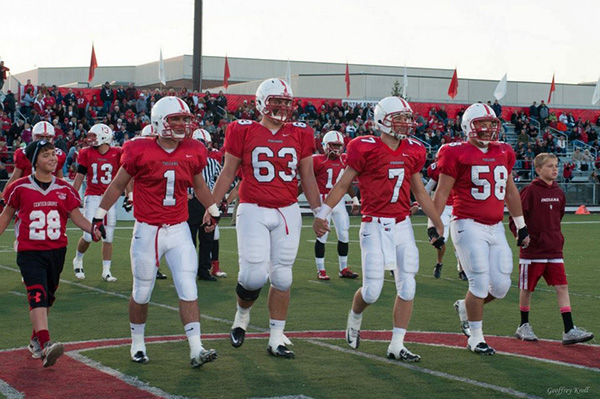 “It was a big rival game against Warren Central – one of the best teams in the state. It was already an emotional night for me. I was named captain and stepped onto the field in front of 5,000 people with my football brothers,” recalls Heydon, now 23. “We played great defense and the final score was 8-5.” From there he joined his team in four more playoff games on the home field and onto semi state.

“It felt great to be back on the field and Methodist saved my life. I think about times before the advances in medicine and I’m grateful that the specialists knew how to care for me.”

After graduation, Heydon attended Ball State University and received a degree in accounting. He began working at IU Health last month. He still attends many Center Grove games and is thankful to count those Friday nights under the lights as some of his best high school memories.

“Working here is like coming full circle,” he said, adding that the IU Health logo is now on the 20-yard line as a sponsor of a new turf at Center Grove. “That logo will always serve as a reminder of a staff that helped care for me.”