Nearly 30 IU Health nurses joined in the recent competition sponsored by the Central Indiana Chapter of the American Association of Critical Care Nurses (CIC-AACN). The Jeopardy-style contest challenged the skill and analytic of new RNs and veterans.

“The competition was fierce. There were 14 teams and lots of friends and family members turned up to cheer on their favorite nurses,” said Mandy Dees, manager of nursing education, University Hospital.  The AACN is a non-profit organization made up of 200 chapters throughout the United States dedicated to providing professional and personal support to acute and critical care nurses in an effort to provide the best possible patient care.

While many competition teams practice for the big football game, the critical care practice is done during around-the-clock bedside care, said Dees. Teams chose questions from six categories – ranging from not so difficult (100 points) to very-difficult (500 points) questions. And just like the NFL championship game, this contest begins with a coin toss to determine who picks the first question.

The teams are quizzed in categories that include cardiovascular, pulmonary, endocrinology, hematology, and renal topics.

Here are some sample questions:

“In order for a stroke victim to receive reperfusion therapy, how long from the onset of symptoms must a patient be diagnosed and treated?”
Answer: 3-4.5 hours

“What is a patient with a large crush type traumatic injury at risk for?”
Answer: Myoglobinuria, Rhabdomyolysis 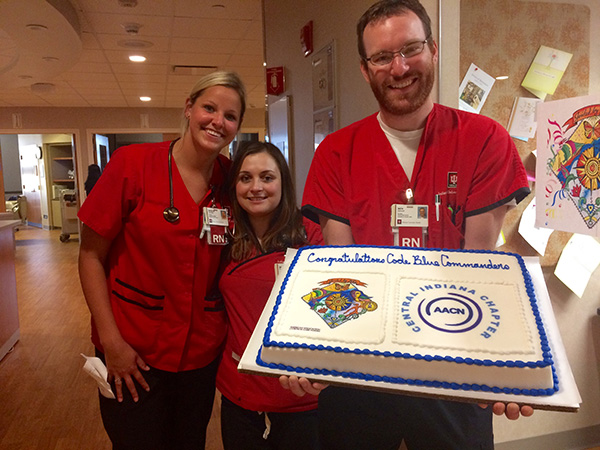 “We’re a very competitive unit and the final round was close between the two teams. IU Health didn’t win last year so it was good to bring the win home,” said Nicole Wallace. It was her third year of participating in the competition.

“These nurses are the best of the best when it comes to critical care and taking care of patients,” said Dees. “For all their efforts, they didn’t get a big trophy but they got to be part of a winning team and have the bragging rights for a year.”