Doreen Lamar kicked off March with a birthday, and an outlook unlike many birthdays of her past. On January 16, 2013 she received a new kidney.

“I was nervous, apprehensive, impatient and scared to death.” 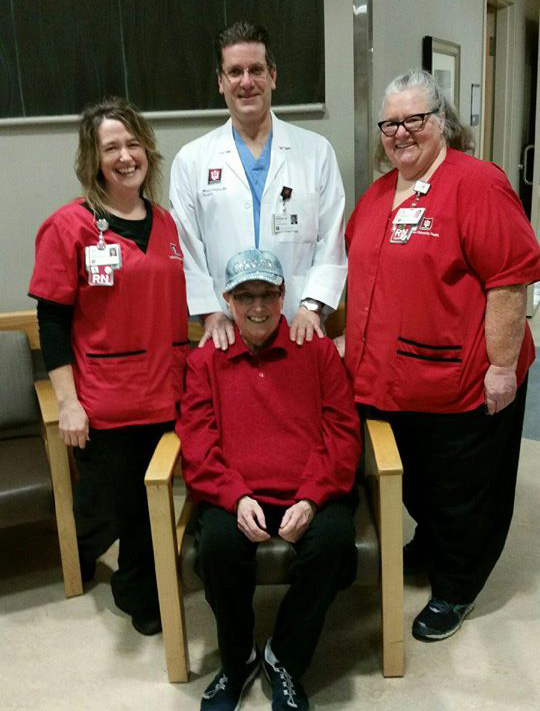 But today, she talks about her transplant surgeon Dr. William C. Goggins, her nephrologist, Dr. Muhammad S. Yaqub, her pre-transplant coordinator, Tina Ray, and post-transplant coordinator, Alisha Turner, like family members. She proudly displays photos posing with her caregivers – including one of her nurses, Pat Failey, who has worked with IU Health for 30 years. Many of the photos were taken on the five-year anniversary of her transplant.

“When I go to visit, there is a chair in the waiting room that they call my ‘thrown.’ Everyone knows where they can come and find me and they do. It’s like coming home,” said Lamar. She’s also known for treats such as brownies and cookies or Tell City pretzels.

“This is an experienced transplant team and I knew I was in good hands. I didn’t have to worry. My first call to IU Health was returned by pre-transplant coordinator Tina Ray.  That was the call that changed my life forever. She was awesome and kept me grounded when I thought there was no hope,” said Lamar. “Leading up to my transplant we knew it would be a complicated procedure. I had been working with three other transplant centers and I didn’t have near the instant confidence that I had when I met Dr. Goggins.”

March is a special month for Lamar – National Kidney Month, a time the National Kidney Foundation focuses on the awareness, prevention and treatment of kidney disease. Today, on World Kidney Day Lamar shares her journey to better health.

Lamar’s kidney issues developed after back surgeries. Her phrenic nerve was damaged leading to paralysis of her diaphragm. After 13 months on a ventilator, her kidneys never recovered. She was on dialysis six years leading up to her kidney transplant.

“I was lucky. I received a kidney from a living donor – Cathy Titzer Burger, one of the strongest women I know and because of her and an awesome transplant surgeon and team, I can feel normal and healthy,” said Lamar, who spent five months as a patient at University Hospital, due to extending health issues.

Lamar drives an 8-hour round trip from her Tell City Home to keep up with her appointments. Those visits are also part of her lifeline to people she now considers extended family. She is outspoken about organ donation and is eager to promote transplant awareness.

“At IU Health, I have never run into anyone that hasn’t had the patient’s best interests at heart.  I am the lucky one because I spent a long time at IU Health so I got to know everyone a lot better than most who come in and have their transplant and then get released right away,” said Lamar.  “Everyone there helped me get through probably some of my hardest times.  They helped me stay upbeat during some very low critical times. Everyone treated me with respect from the minute I walked into the door until I was wheeled out the door the final day. My awesome transplant team has kept me on the road to recovery and another chance at life.”