Sebastien Cosyns was near the end of his 12-hour shift when the call came. He was summoned north to transport a little girl to Riley Hospital for Children at IU Health. For a moment he hesitated – knowing that he could not exceed the maximum duty of hours. Would he make it there and back before the end of his shift?

After using the flight planning systems available to him, he decided the flight could be completed safely and within all regulations. The medical crew worked quickly to prepare the little girl for transport and they made it to Riley where Cosyns ended his shift with five minutes to spare.

The next day Cosyns was assured he made the right call. The little girl was stable. A delay may have come at a price.

Thinking fast and acting fast are traits Cosyns has learned over the years.

Born in Montreal, Cosyns migrated with his family to New Jersey when he was a teen. After high school, he studied aviation at Embry Riddle Aeronautical University and eventually enlisted in the Army. 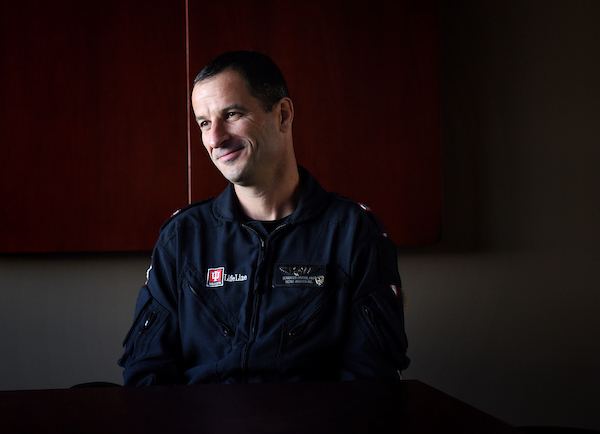 “I’ve wanted to be a pilot pretty much since I was a little kid,” said Cosyns, 46, who works for Metro Aviation. “I loved going to the airports and watching the planes taxi off and land. Then we’d go to the river where there was a sea plane base and I’d sit for hours just watching the planes.”

He remembers the thrill of his first passenger flight when the flight attendants let him visit the cockpit of a former Sabena Airlines craft.

But the real adrenaline rush came in the military when Cosyns was trained as a helicopter pilot. Over the course of more than two decades he completed tours of duty in South Korea, and the Middle East – including a Persian Gulf overwater mission and flights that had him navigating 11,000-foot mountains.

“On each deployment I’d sit in the cockpit of the chartered plane and ask questions. I was curious and I wanted to learn more,” said Cosyns. “You never knew what you were getting into. One of the scariest times was flying from Kuwait to Iraq. No one taught you what it was like to be shot at or what to do if bullets are coming at you. You learned on the job. You learned to adjust air speeds and altitudes and to keep moving because if you stopped you could get shot. We learned to adjust to the situation like flying just above the treetops or landing on ships over the Persian Gulf at 2 a.m.”

Working as an air attack pilot meant different duties on different days for Cosyns who was part of a 24-craft unit. Some days he provided watch for ground troops keeping a look out for any surprise attacks and other days he escorted ground convoys transporting everything including food, fuel, mail and supplies. Other days they were escorting VIPs – some who were there to perform for the troops – such as country music icon Toby Keith; others were there with political agendas – such as former US Secretary of State John Kerry and former British Prime Minister Tony Blair.

How did his military experience prepare Cosyns as a LifeLine pilot?

“It’s about being ready to react and respond to the call,” said Cosyns. “My job is to fly the medical crew safely from point A to point B. Whether it’s a baby, or a 70-year-old man, I can’t let anything influence me to rush and make a decision that could cause a mishap.”