Rebecca Knight was missing her Carroll County home. She had spent nearly two weeks an hour from her family and friends. Coughing and wheezing – a symptom of her cystic fibrosis – was the reason she was admitted to IU Health University Hospital.

“The most frustrating thing is not being able to walk,” said Knight, 28, a patient of IU Health pulmonologist Dr. Cynthia Brown. 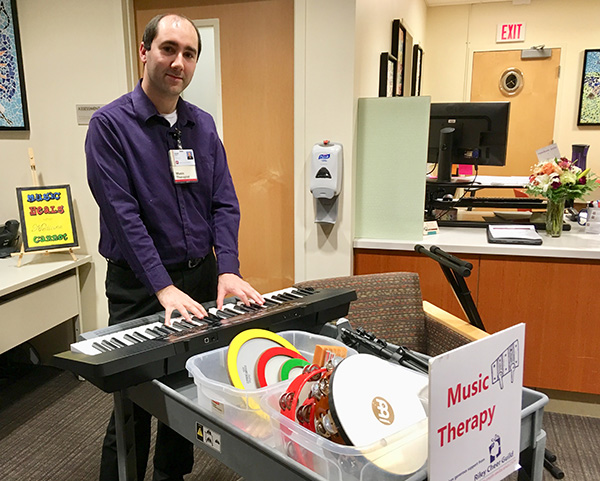 “I can’t walk. It makes me sad. I want to walk down the hallway right out of here and return to Flora,” he sang. As he sang, Perry strummed the guitar and Knight joined in keeping rhythm on a bongo drum, near her bedside. And as she tapped the drum, she smiled.

“The music just helps relieve the stress and makes me happy,” said Knight, whose favorite artists are Reba McEntire and Brooks & Dunn.

For Perry, the jam session was part of his new gig at IU Health Cancer Resource Center as a music therapist. Working three days a week, Perry brings music to the patient’s bedside as part of a technique to facilitate healing by nurturing the patients’ mind, body and spirit. Music is one of the Cancer Resource Center’s CompleteLife creative therapies that also include, yoga, massage, and art.

“Taking music to the individual rooms helps normalize their hospital stay and brings them a few of the comforts from home,” said Perry.

A native of Long Island, N.Y., Perry completed his undergraduate degree at Ithaca College and his masters in music therapy from Temple University. Before joining the CompleteLife staff Perry completed an internship at the Children’s Hospital of Philadelphia.

Perry began pursuing music at the age of eight with piano. Twenty years later he continues with piano. In high school he played xylophone with the marching band, and piano with the jazz band and high school musical. He also accompanied the student choir.  He later took up voice lessons in college.

Perry said the first time he learned about music therapy was when US Representative Gabrielle Giffords was shot during an assassination attempt in Arizona in 2011.

“I remember hearing a lot about how music therapy played a big role in her treatment and recovery,” said Perry. “When I learned more about it, I knew music therapy was a good fit for me.” After completing his internships, he knew he wanted to work in a hospital setting.

“Music is a universal language that anyone can grasp and can participate in a variety of ways – whether it’s listening or performing. In just a few minutes you can make meaningful connections and have fun doing it,” said Perry. “I like having a touch down space that I share with other therapists and since it’s located in the Cancer Resource Center, it’s also a public space to connect with people.”