And it’s an injury that surgeons and doctors used to do absolutely nothing about.

So, he decided he would do something about it. Dr. Pohlman took a sabbatical to Portland in 2009 to learn a technique called rib plating. 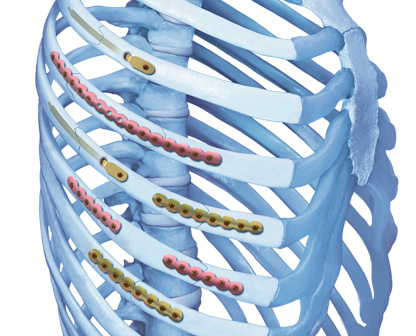 Much like a broken arm or leg needs to be stabilized to heal, so do the ribs. Dr. Pohlman started performing the procedure at Methodist that fuses broken ribs back together with bendable titanium plates.

He has seen remarkable recovery from patients. Healing is often shortened from months to weeks. Fewer long-term effects are arising. But the thing that most patients notice is how quickly the pain subsides.

“They literally are in agony,” Dr. Pohlman says. “And you take them to the operating room and they wake up the next morning and they are reading the newspaper.”

Methodist, a Level I trauma center, was the third busiest in the nation for rib plating in 2016 – performing the procedure on about 80 patients.

That’s a good percentage of its population of patients with cracked ribs getting the surgery – 20 percent. The trauma center sees about 4,000 patients a year and about 400 of those have multiple rib fractures.

It came several years ago for Dr. Pohlman when he was treating a patient, a mailman, with fractured ribs.

For weeks after his injury, the patient passed all the tests for breathing and coughing. But at a follow-up appointment, Dr. Pohlman told him to step up onto the table for an exam. The patient said he couldn’t get up on the table.

Dr. Pohlman asked him to lie down. The patient said he couldn’t lie down. He had been sleeping in a chair at night.

Then Dr. Pohlman asked him how his job delivering the mail was going.

“I can barley pick up a letter,” the patient said, “let alone a mailbag.”

Dr. Pohlman started thinking. What about all these young active people who suffer from broken ribs and are left with long-term effects.

A friend of Dr. Pohlman’s, a surgeon in Australia named Silvana Marasco, M.D., had done a study. For two years, she followed the 200 most severe cases of broken ribs that came into her trauma center.

At the end of her study, she found that 30 percent of those patients weren’t back to work. They were on permanent disability.

“I was at a meeting when she presented this paper. You could have heard a pin drop,” Dr. Pohlman says. “It’s a huge, huge number.”

And that doesn’t even take into account the people who are back to work, maybe at a desk job, but can never again have an active life.

“They’re not in the backyard throwing football with their kids. They’re not exercising,” Dr. Pohlman says. “You’re talking young people. Their lives are over. They are sitting in an easy chair watching reruns of the ‘I Love Lucy’ show.”

It was astonishing to him that nothing was being done to take care of one of the most common and painful injuries.

After training in Portland to learn the procedure from Riyad Karmy-Jones, M.D., Dr. Pohlman returned to Methodist in 2010. He and Robert L. Reed, M.D., a trauma surgeon at Methodist, are the two main surgeons who perform rib plating.

Not every patient with cracked ribs gets the surgery. But the number is growing each year.

“It’s a new way of doing things. It’s an evolution,” says Dr. Pohlman. “Every day, we are learning new things.”