A Gin Blossoms song is playing inside Andrew DeNardo’s office, where he sits next to a computer with a screensaver of a bright red Ducati motorcycle.

There is a woodworking magazine on his desk – next to a piece of paper where he’s sketched an amazingly easy-to-understand drawing of the complex world he works in.

But that’s Andrew DeNardo, M.D. He’s anything but pretentious. He describes himself as a “brain plumber.”

“It’s all plumbing. Or, sometimes, I tell people I’m a cardiologist for the brain,” says Dr. DeNardo. “I deal with the blood vessels in the head and in the spine. But most of it’s in the head. And so if it’s leaking, we plug it up. If it’s plugged up, we open it.”

Dr. DeNardo does it all with a kind word and a compassionate heart. And with a bit of flair. 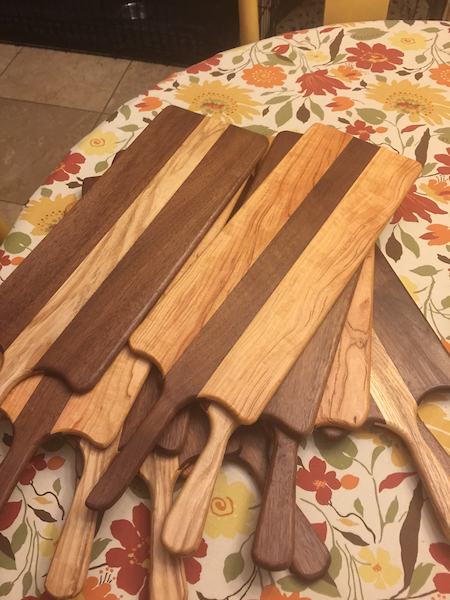 He loves to ride motorcycles – he owns two red Italian models, the Ducati and a Moto Guzzi. When the weather is good, he rides to work on those bikes and saves lives.

He also relishes the time in his woodshop, crafting salt and pepper shakers, cutting boards and all sorts of other knick knacks. He’s down to earth in a way that’s contagious.

Perhaps, that has to do with his upbringing. After all, he spent his summers as a young man in the world of construction.

Dr. DeNardo grew up in Pennsylvania. His father is a civil engineer and owned a construction company. In the summers, every year up until his second year of medical school, Dr. DeNardo worked road construction, highways.

Yes, this doctor who cures the delicate brains of his patients used be a mean jackhammer user. He looks back on those days fondly.

Dr. DeNardo didn’t know as a young boy that he would be a medical doctor. But he knew he liked the sciences and went to the University of Virginia for his undergraduate degree.

He was thinking of a major in chemistry until he saw what the university PhD folks did in chemistry. 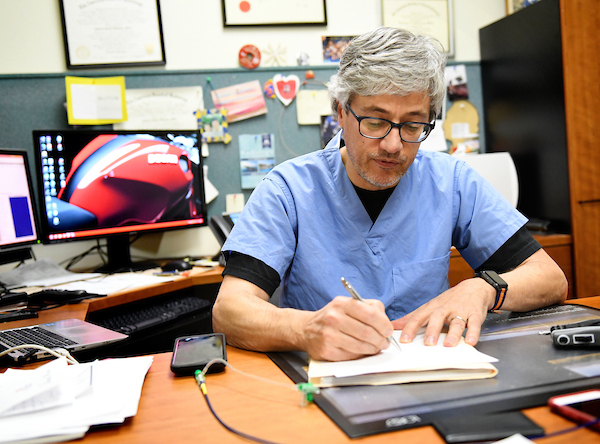 “It’s stroke patients, aneurysm patients, patients with blood vessel problems in the head,” Dr. DeNardo says. “There are different blood vessel malformations where you have the arteries abnormally connected to the brain. That can cause bleeding and or stroke. We try to cut off those abnormal connections.”

It’s not that more people are having strokes. It’s that the endovascular approach to stroke has become scientifically proven – and used more frequently.

When it comes to aneurysms, the interventional neuroradiology program is the top five in the country for using the Pipeline stent, a procedure that uses a micro catheter to navigate past the aneurysm without having to enter the aneurysm.

Almost immediately, blood flow to the aneurysm is reduced. And by six weeks to six months, complete closure of the aneurysm typically occurs.

“It allows blood to go through to small blood vessels slowly over time grows,” Dr. DeNardo says. “As a former concrete guy, I think rebar.” 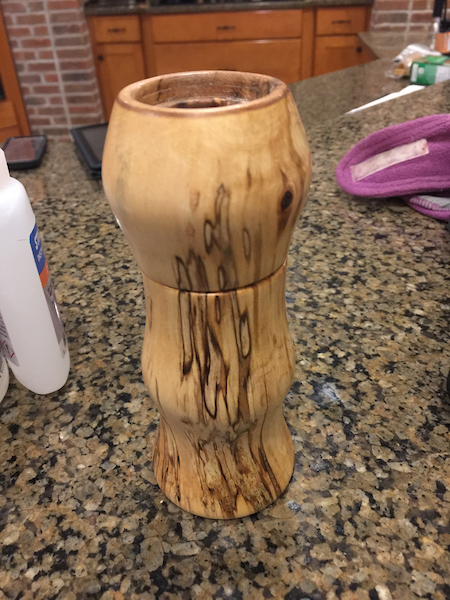 “They take call from home with new technology. They can look at a scan from anywhere, and that provides a rapid response for patients,”  she says. “They are second to none — low key, but fantastic at what they do.”

Personal: He is married to Diane, his high school sweetheart, and has two grown sons. The family has two Irish wolfhounds, Sona and Jenna, and two Cavalier King Charles Spaniels, Louie and Buddy.

Bonus: Dr. DeNardo invented a device for closing the hole in the groin after procedures.