He’s a toxicologist. She’s in critical care. Both are clinical pharmacists.

He’s an intensely organized, quiet guy. She’s OK with a bit of disarray and is definitely outgoing.

It sounds so cliché – to say that a couple complements each other. But Jim Mowry and Judi Jacboi-Mowry do just that.

Together, they are a force to be reckoned with – the power couple of IU Health Methodist Hospital. The two are nationally and internationally recognized in their fields. They travel the world speaking and lecturing. They publish papers and mentor young pharmacists.

“They are two of the smartest people I know,” says Kathy Hendershot, director of nursing operations at Methodist. “They are like a brain trust. Impressive and world-renowned – both of them.”

It was a baby girl that led Jim to a career in toxicology.

One of his first nights on call during his pharmacy doctorate program at the University of Minnesota, an 18-month-old girl came in with an iron overdose. 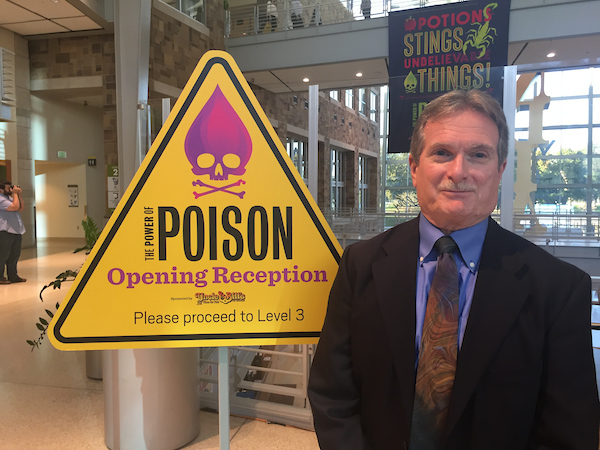 “It was probably still the most severe iron poisoning I’ve ever seen,” says Jim, PharmD, DABAT, FAACT, manager of poison control at IU Health.

The child, who had been fed her mother’s prenatal vitamins by a sibling, died in less than 24 hours.

“We tried to do all kinds of heroic measures,” Jim says. “It was a very tragic case.”

That case stuck with Jim. So did what happened to his colleague during his pharmacy school days. That colleague got methanol poisoning and ended up mostly blind.

Both cases made Jim realize there was a need for people in toxicology who understood those drugs and how to manage and treat them.

Three decades later, he says he absolutely made the right choice in specialties.

Jim’s days start early, rounding on patients at all three hospitals, Methodist, University and Riley Hospital for Children at IU Health, checking in on poison cases.

The rest of his day is filled with duties overseeing the Indiana Poison Center, located at Methodist. The center takes about 58,000 calls a year and has a staff of 16 nurses answering the phones.

There are seven physician toxicologists that run the medical toxicology consult service and a health educator that goes out and does poison prevention and education.

Jim, who has been at Methodist since 1988, keeps everything running smoothly.

“He is one of the most organized and efficient people that I know,” says Judi. “He is just incredibly focused. He really will work on something until it’s absolutely done to his satisfaction.”

Critical care caught hold of Judi in a very raw way. She was on one of her first rotations and a patient was dying. She had never seen a person take his last breath.

As she observed and asked the nurses questions, she knew. This is where she wanted to be. 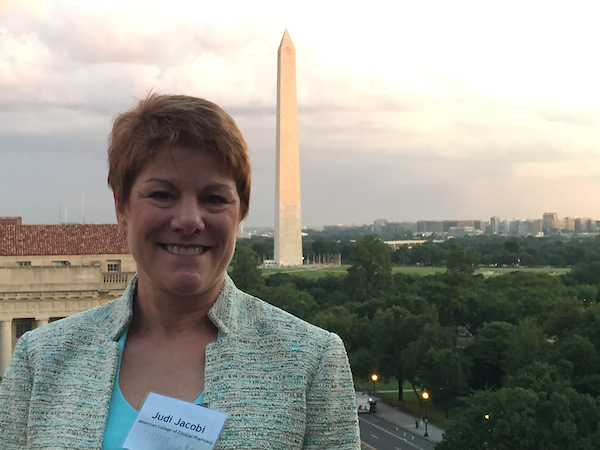 “Just the environment, the compassion, the teamwork,” says Judi, PharmD, MCCM, FCCP, BCCCP, critical care pharmacy specialist at Methodist. “This was the early 1980s and a very physician-dominated patient care environment. But, in critical care, it started as a team sport.”

When Judi came to Methodist as the only critical care pharmacist in 1995, there were 80 critical care beds. She worked with a hospital-based team and saw just a small portion of the patients. She knew there was a need beyond that.

Judi worked with others to train, hire and build a team. Today, there is a pharmacist for each critical care unit responsible for the drug therapy for patients in that unit. The pharmacists round with the team and are a resource for the nurses.

It’s a lot of problem solving. Can one drug be taken with another drug? Could a patient’s unusual symptom be drug related?

“She’s the resource that everybody goes to when they have a problem. She is the person that will spend the time to help,” says Jim. “She’s brilliant. But, she’s also always thinking about how to do things best.”

Judi was born in a suburb of Milwaukee, Wis. Her dad was an engineer and her mom stayed at home, involved in all sorts of volunteer work.

Her grandfather was a pharmacist at a drug store — one of those iconic drug stores, with the wooden counter and the soda fountain and all the rows of penny candy.

“He was quite a fixture in the neighborhood,” she says. 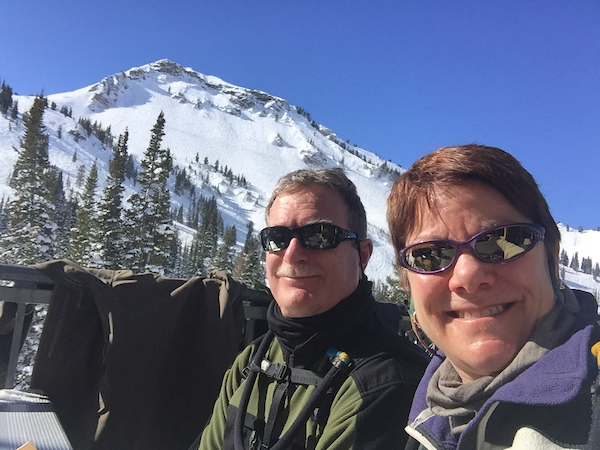 In high school, she excelled at math and science, was part of the student government and worked stage crew for the musicals. She was a Girl Scout until she was 18, which kept her busy camping and racing canoes.

As Judi was choosing a career, a guidance counselor mentioned pharmacy. The University of Wisconsin had a top program and so did Purdue University. Judi had a really good friend who was going to Purdue.

So, it was off to West Lafayette to become a pharmacist.

Jim was born in Carbondale, Ill., home of Southern Illinois University. His dad was a professor at the college, running the experimental horticultural center —  a peach and apple breeder.

His mom stayed home but also did volunteer work at the church and local hospital, where she spent years as a “pink lady.”

Jim started at Southern Illinois with big plans to become a chemist. His first chemistry course quickly changed that notion. But an elective in pharmaceuticals caught his attention and he signed up.

“I thought this really sounds cool,” Jim says. “And that’s when I decided I wanted to be a pharmacist.”

But both Jim and Judi wanted to do more than work in a retail setting or at a hospital pharmacy – which was what most pharmacists did at the time.

They liked the idea of clinical pharmacy, rounding with teams, assuming responsibility for drug therapy and drug dosing and managing the patient face to face.

They ended up getting their doctorates in pharmacy at the University of Minnesota – but didn’t meet there. Jim was two years ahead of Judi.

Yet, it was the Minnesota connection that ultimately led to their chance meeting.

They were in San Francisco in December of 1980 at a national pharmacy meeting. All the people with a University of Minnesota  connection were hanging out.

Judi was 24, and finishing up her doctorate. She saw Jim. It was “pretty much” love at first sight, she says. She asked another pharmacist who he was.

At the time, Jim was working in Oklahoma as a clinical pharmacist, with plans to take over the poison center there. He had just finished a yearlong toxicology residency in Tennessee.

Everyone at the conference knew Judi was looking for a job. They told her she should go talk to Jim, that he might have something. 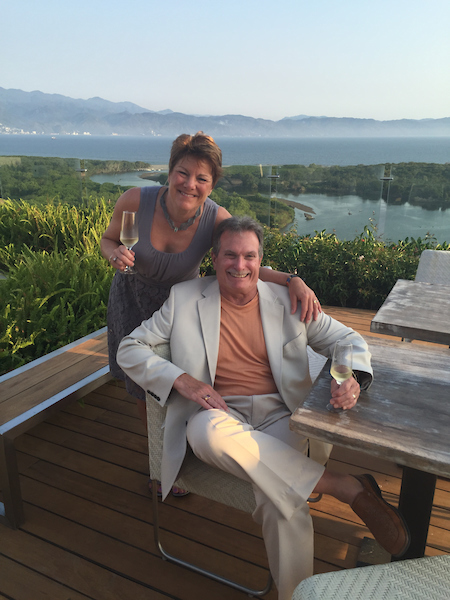 In that big reception hall, Judi went up to introduce herself to Jim. They spent the rest of the week in San Francisco together. Both knew then this was the real thing.

But they didn’t know that Judi would be the one to land Jim his job in Indianapolis.

It was the next month, in January, Judi was back at the University of Minnesota working at its drug information center when a call came in.

It was a man Judi had trained with at Purdue. He was calling to talk to Judi’s preceptor, who happened to be unavailable. He wanted to let her know about a drug and poison center in Indianapolis.

“And I said, ‘Well, I just met this guy and he really wants a poison center,’” Judi says. “That’s what brought Jim to Indiana.”

Jim came to the Indiana Poison Center in 1981, which was located at the former Wishard Hospital. In 1988, it moved to Methodist and so did Jim.

Judi, meanwhile, went to Ohio State University for a residency in critical care pharmacy. They saw each other every other weekend.

The marriage proposal happened at the top of a water tower in Giant City State Park in Illinois. They were married in 1982.

As they sit in Methodist, there is still that glimmer, that twinkle in their eyes as they look at one another.

Judi loves Jim’s dry sense of humor. She loves that, as she’s gotten involved in more and more things throughout the years, he has been there to reel her in.

“He’s kept me centered and focused,” she says.

Jim loves that Judi is the outgoing half of the relationship. 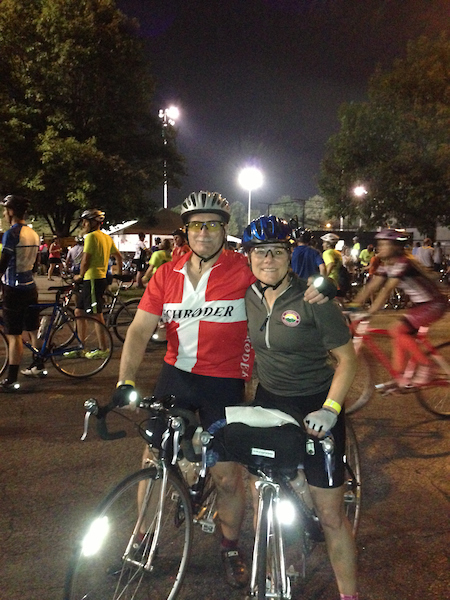 “I hardly said anything when I was in pharmacy school. You couldn’t get me to talk at all,” he says. “She pushes me to be more outgoing.”

As for the secret to 35 years of marriage?

“We are so blessed to have similar interests,” Judi says. “Our best nights are when we’re playing tennis on courts next to each other or cycling together.”

They have found that perfect complementary balance.

“It’s just a team approach to everything,” Judi says. “And it works.”

Career Advice From The Power Couple

Jim: “When I first started my career, I thought everything was black and white, and I’ve learned that it’s all gray. There are multiple ways to get to the same end point and there’s no one way that’s the best way to do it. So, you always learn. I want to learn something new every day. That’s the only way you can stay fresh and stay motivated.”

Judi: “Honestly, the No. 1 thing that holds most people back is themselves. They’re often thinking, ‘Oh, I’m not good enough. I’m not smart enough to do that.’ In reality, there is so much to be done and the leaders are just waiting for someone to raise their hand to do it.”