Mindy Mayes has a degree in public health so she knows about the risk factors associated with obesity – diabetes, high blood pressure, cancer, heart disease, blood clots, and renal problems. She also knows how family history plays a role in those health hazards.

A reality check came on April 19, 2016 when she had her initial consultation with Dr. Jennifer Choi of IU Health North Bariatric, stepped on the scales, and read the numbers: 385.9 pounds.

“I was shocked.  . . my gosh, I was less than 15 pounds shy of 400, I have to do something. I do not want to live my life obese, overweight, and with an increased chance illness,” she wrote in her blog, “Loser’s Bench.” For six months she met with a nutritionist and nurse practitioner, talking about eating habits, diet and exercise. Her surgery was scheduled for December 12, 2016.

Originally from Virginia, Mayes said before she considered surgery, she “researched hospitals and then researched the research” but felt a connection with Dr. Choi.

“I knew if I didn’t make a change it was only a matter of time before I too had these illnesses. I’d lost weight before, 75-100 lbs, but gained it all back and then some. I knew bariatric surgery has shown to be an effective way in losing weight and keeping it off,” said Mayes, who works as a Health and Human Sciences Extension Educator with Purdue Extension, Grant County. She is also a Pastor in the African Methodist Episcopal Church, and now a Zumba instructor. 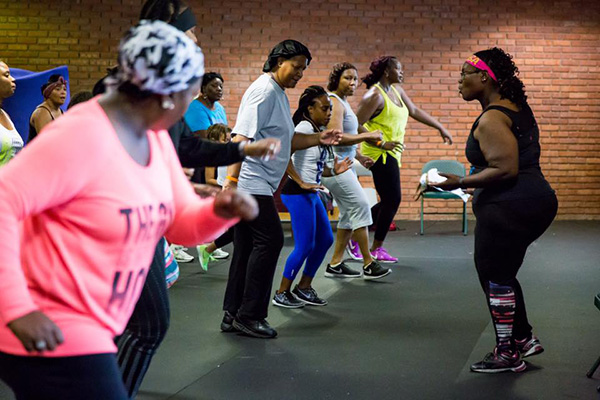 “Teaching Zumba is something that I have always wanted to do, but with the weight, it wasn’t something that I would have realistically been able to do. After starting to lose the weight I decided to look for trainings in the area and found one and got certified. I love that you can work out and have fun at the same time. Zumba is for any activity level, so anyone (even rhythmically challenged people) can do it,” she said.

There were other things she looked forward to doing too she said – riding a roller coaster again, fun adventurous activities like zip lining and rock climbing, wearing cute dresses, and shopping in “normal” people sizes and wearing an airplane seatbelt without an extender.

In February, just two months post surgery; Mayes described her weight loss as equal to 640 Oreos – a total of 59 pounds.

“I eat three meals a day with 2-4 ounces of food in each meal. It may not seem like a lot of food, but surprisingly it is. My focus is on protein and fluids, making sure I get between 60-80 grams of protein and 48-64 ounces of water,” she wrote. She also avoids carbs. On a rare occasion she eats a slice of bread, a few jellybeans or a scoop of rice.

“For me the key is being true with and to yourself, and not lying. I write down everything I eat.”

After six weeks she was back in the gym working her way toward another goal – running a 5K.

In a six-month update Mayes changed the name of her blog from “Loser’s Bench” to “Winning Walk.”

“We’re not losers (well, I guess in some cases we are since we are losing pounds, but you get my point). We are winners, so welcome to my winning walk,” she wrote. She had lost 111 pounds, dropped from a size 28/30 to a size 22/24 and had taken her first plane ride without a seatbelt extender. She went zip lining, hiked the Grand Canyon, bought a bike; completed an “insane 5K” that included 11 obstacles; and began teaching Zumba.

“Surgery is a tool that you have to put to work. There will be times that it is tough, but you can do it. It’s about living a healthier life and being the best person you can be.”

And Mayes is a proponent of exercise – even starting small with three, 10-minute walks a day.

On Saturday, Mayes will offer a Zumba demo and then join others in her first “Walk from Obesity.”

“I’m excited to join my bariatric brothers and sisters, their friends and families. If we put our minds to a goal, we can do it,” said Mayes. “It’s one step at a time. This is a journey, not a marathon or a sprint. It’s all about pacing ourselves to the endpoint.”