That’s how some people see the strength of Kortney Arnold, 27. The Jeffersonville resident came to IU Health Simon Cancer Center following a treatment plan by Dr. Jose Azar. She was pursuing an associate degree in nursing when she started having symptoms that were eventually diagnosed as non-Hodgkin’s lymphoma.

“My cancer was in my salivary glands. I had chronic inflammation and infection, lots of pain,” said Arnold. Surgery followed to remove cancerous cells from first the left side and then the right side of her throat.

Dr. Azar recommended immune therapy, and a few months later she began chemotherapy. “He said there was a good chance I’d lose my fertility. We had no children at the time,” said Arnold, who married her husband Mike at the end of 2010.  But she defied the odds.

She was visiting a fertility specialist when she learned she was pregnant with their first child. Daughter Kizely was born in November of 2012. But their family wasn’t yet complete. 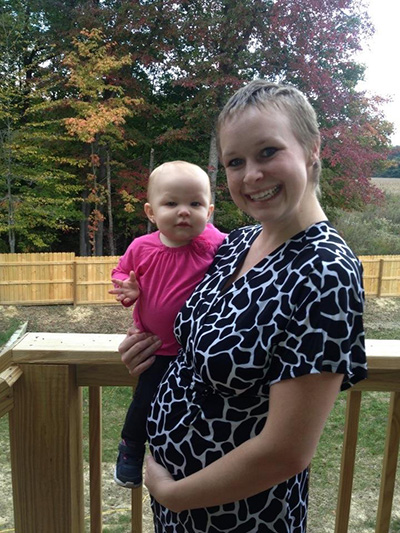 “After Kizley was born I did chemo for a few months, lost all my hair and Dr. Azar said I probably wouldn’t get pregnant again so we were foregoing birth control,” said Arnold. “I was having menopause-like symptoms when I found out I was pregnant with our second daughter, Kuinlynn.”

A year later, she obtained a bachelor’s degree in nursing. In August of 2015 she again defied the odds. Their son, Korcen, was born.

Arnold pursued her nursing career in ER before returning to school for a master’s degree. In May she became a nurse practitioner working in Louisville and specializing in anti-aging and wellness.

Arnold’s first encounter with IU Health was at the age of 13 when she underwent surgery at Riley Hospital for Children, to correct a birth defect. The operation, known as Ladd procedure involved correcting an abnormality in her intestine. Two years later, at the age of 15, Arnold was diagnosed with Sjogren’s syndrome, an autoimmune disease that affects the entire body, attacking glands that produce tears and saliva.

“The care here has been beyond anything I could expect,” said Arnold. “Dr. Azar is amazing. He also teaches me. When I was first diagnosed, he did an amazing job of acknowledging my level of knowledge and explaining the process in a way that satisfied my need for specific medical information.”

Arnold recognizes the strides she’s made – the odds she’s defied – even as she faces ongoing treatment.

“I have good days and bad days but I try to remain positive,” said Arnold. “I know it could always be worse. What keeps me going are my kids and my family. When people ask me what it’s like to have cancer, I tell them in a sense I feel blessed because cancer has taught me to live life to the fullest. You aren’t guaranteed a future. The future is now.”