On a recent weekday, Brad Kremski was interrupted often with knocks on the door of his hospital room and a few unexpected phone calls from his home in Tampa.

“This morning has not gone as I planned. I really wanted to just settle in and paint,” said Kremski, who arrived at IU Health Simon Cancer Center on the first day of the New Year. He was feeling stronger after weeks-long treatment for testicular cancer that combined high-dose chemotherapy followed by a stem cell transplant. 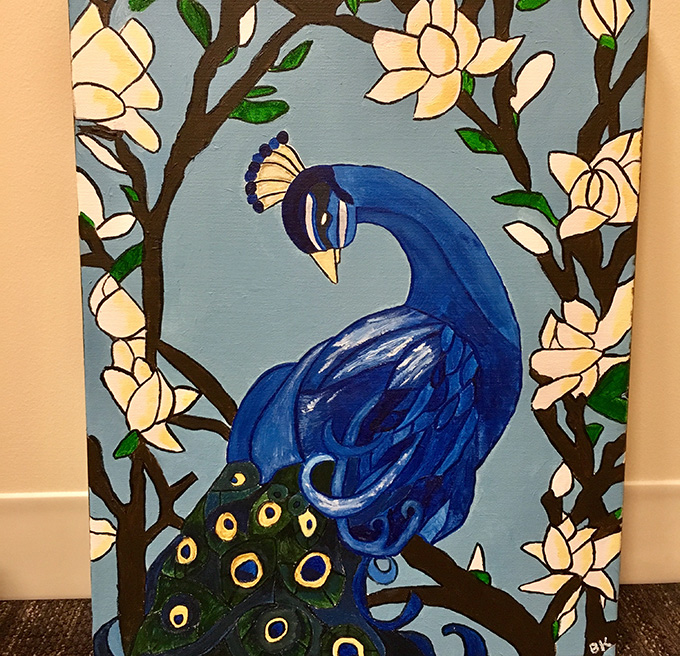 It was when he was first diagnosed back in Florida that Kremski had a vision that he describes as a bird – a dirty bird. He decided then that the dirt represented cancer. When he arrived in Indianapolis, the vision came back to him. This time the bird was illuminated like it was surrounded by stained glass.

“When Brad described the vivid details of the imagery and symbolism within the dream, it was obvious that it was a meaningful, inspirational, and reassuring part of his cancer journey. I was truly honored to be able to support him in creating a painting that would illustrate this source of inspiration, said Lisa Rainey, Cancer Resource Center Art Therapist, who helped Kremski identify a species of bird reflected in his dream. Together, they settled on a peacock – the vibrant colors subject to interpretation that Kremski saw as hope for a future free of cancer.

Rainey said her goal as an art therapist is to get to know patients so she can help them heal by designing clinical art therapy interventions focusing on the patient’s strength and then supporting those strengths through the creative process.

“Brad was so dedicated to completing this painting, that even on the days that he was feeling his worst, it was a source of motivation to get out of bed and actively engage in something positive for a while. I witness patients get lost in their artwork, and forget about the symptoms and pain they might be experiencing,” said Rainey.

“It was such a pleasure to see the painting as it progressed from a drawing through its completion. After every single session, there was a visual representation of something that he accomplished that day. It also provided Brad with opportunities to make choices and to have control of something while in the hospital.” 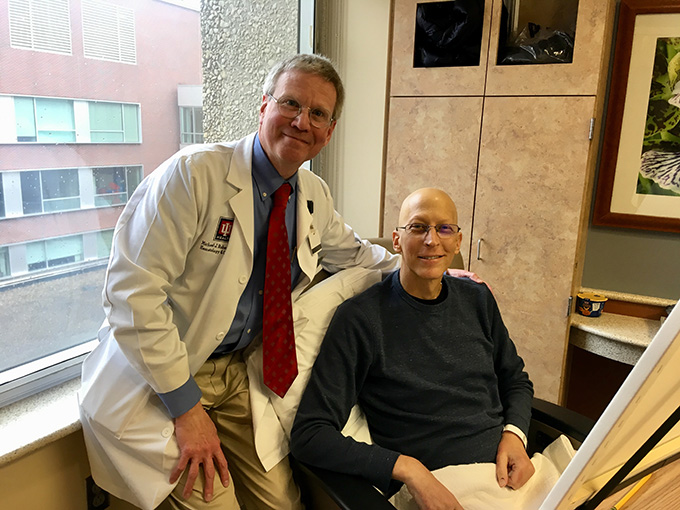 During a recent painting session, one of his visitors was Dr. Michael Robertson, who specializes in hematology and oncology at Simon Cancer Center.

“I think he’s doing a smooth change in the right direction,” said Dr. Robertson days before Kremski was discharged.  “It is not uncommon in tandem transplants for patients to do a better course the second treatment.”

Sitting near the window of his hospital room, Kremski took in the natural light as he sketched the outline of the bird and then chose colors for the painting.

As he sketched, he talked about his family back home – his wife Michelle, and his two sons.

“I haven’t really painted in 10 years and even then art was just something I did for fun. I’d head out with a couple of friends, we’d grab a couple of canvases and just go with the flow,” said Kremski, who works as a massage therapist. “I believe in alternative health. I meditate and I try natural ways to stay healthy. When I was referred to IU Health, I knew I had to come. The staff has been amazing and I just feel like I’m in the best care.”

And then he has little more to say – he has a painting to complete.

“To have this creative outlet means so much to me. I’m a perfectionist and I want to finish this and regardless how it turns out, I will still hang it in my office as a reminder – I will draw strength from it as I rebuild my health.”