Businessman Dave Foster heard the diagnosis and thought of another well-known entrepreneur, Steve Jobs. The co-founder of Apple Computers, Jobs battled pancreatic cancer for nearly a decade before he died at the age of 56.

“When you read about pancreatic cancer survival statistics you think the worst – so few people even have surgical options,” said Foster, a Vietnam War Veteran.

He remembers that time of service, stationed in Pleiku, a city in Central Vietnam as intense and scary.

“When it turned dark at night you could expect something bad to happen,” said Foster. He has faced darkness and fear. His diagnosis set off more angst. To help him cope with that fear, Foster focused on an event that he was determined not to miss.

His daughter was engaged to be married.

“You hear so often in cancer journeys dads want to walk their daughters down the aisle and dance at their wedding,” said Foster’s wife of 44 years, Barb Foster. 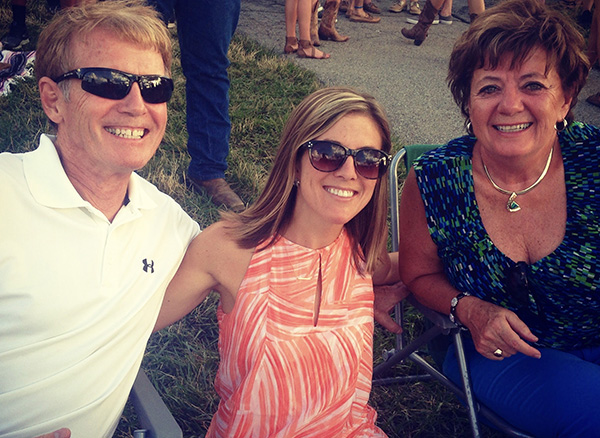 Angela Foster Church, who has worked in Revenue Cycle at IU Health for nearly 10 years, was one of the first people her parents called with the news of her father’s cancer diagnosis. The couple, which lives in Granger, Ind. nearly three hours north of Indianapolis had heard from their daughter about IU Health’s “patient-centered care” philosophy, said Barb Foster.

It was summertime when Dave Foster first felt something wasn’t right. He remembers munching on a bag of cashews, a Father’s Day Gift, and afterward experiencing some digestive issues. A few days passed and he decided to visit his family doctor.

A CT scan followed and then a biopsy that revealed Stage 2a pancreatic cancer. Shortly after, he became a patient of Dr. Michael House.

“Being in the real estate profession, it was like a wink from God that my doctor would be named ‘House,’” said Foster. “There were other doctors in Indy with the name ‘House’ but let it be known there is no one like Dr. Michael House.”

Fosters first consultation with Dr. House was July 11, 2012 and his surgery was scheduled for two days later on Friday, the 13th.

“From the minute he came through the door Dr. House exuded supreme confidence and positive energy. His smile and enthusiasm were contagious. He was extremely thorough in telling me my diagnosis, the options available, his recommended treatment plan and potential outcomes. His confidence and presentation gave me hope,” said Foster.

This month during his five-year remission, Foster joins other patients and healthcare providers in advocating for men’s healthcare during World Pancreatic Cancer Awareness Month.

On a recent visit back to Indianapolis, Foster, his wife, and daughter, talked openly about the care Foster received through IU Health.  The Fosters have an older married son in Granger, Dustin, and two grandchildren. They credit their daughter for helping navigate their path in Indianapolis and their son and his family for helping care for Dave back in Granger.

“We couldn’t have done it without them,” said Barb Foster. “We just had to focus on treatment and recovery.”

When they met Dr. House, they knew that plan was coming sooner rather than later.

“I couldn’t believe it when he scheduled my surgery two days after I visited him, said Foster. “That was so typical of Dr. House. He put his patient first and added one more to an already full surgical day.”

After surgery, Dr. House met Foster’s family in the waiting room and drew a sketch of the procedure.

“Again, after long hours in surgery he was still uber positive and re-assuring to my family,” said Foster. “During my in-patient recovery Dr. House was on top of everything. He doesn’t miss a thing.”

House then coordinated follow-up chemotherapy and radiation at IU Health Simon Cancer Center – a treatment plan Foster believes helped him make it to the five-year mark of his remission. 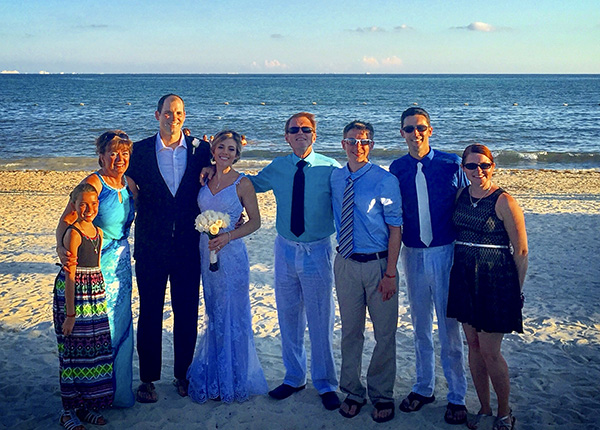 Dave Foster didn’t walk his daughter down the aisle – of a sandy beach during a private ceremony in Mexico and danced with her to “Butterfly Kisses.”

“Cancer changes the concept of having a massive wedding,” said Barb Foster. “It was more important to share the joy and the experience with our immediate family.”

The Fosters didn’t know then the full extent of Dr. House’s care for his patients – even after surgery and into remission.

Foster reached out to Dr. House for advice and was connected to Dr. Michael Koch, IU Health Chairman of Urology.

Only a handful of patients have received the FDA-approved HIFU at IU Health and on September 13, Foster became one.

“Dr. Koch did a Fusion MRI plus biopsies and found an aggressive cancer and said I was a good candidate for the procedure,” said Foster. “It was a non-invasive, outpatient surgery. They nailed the spot and basically, I’m good to go.”

The American Cancer Society estimates 161,360 new cases of prostate cancer in 2017. Other than skin cancer, prostate cancer is the most common cancer in American men. About six cases in 10 are diagnosed in men aged 65 or older, and it is rare before age 40. The average age at the time of diagnosis is about 66. About 26,730 deaths are estimated in 2017 from prostate cancer.

“I’m one of the very, very few with pancreatic cancer who is still alive. This is just another good example of Dr. House and his follow up. He was proactive and saved my life again,” said Foster. He’s won us over a million times,” said Barb Foster.

Recently the Fosters received a personal note from Dr. House. It said, “I am very glad your prostate treatment is going well. . . . If you ever need any medical assistance or advice, always feel welcome to contact me.” It was signed “Sincerely yours, always, Michael G. House, M.D.”

As Dave Foster shows the letter, his daughter talks about life lessons learned by her family throughout her father’s treatment. “One of our favorite songs is Tim McGraw’s ‘Humble and Kind’ – the words have real meaning to us,” said his wife.

“I come from the other side patient care – administration.  I see what it takes to bring in and retain the top talent,” said Angie Foster Church. And I’ve been so impressed with dad’s care from this top talent and staff. Experiencing this with my family gives me real empathy for patients coming in.”

And Dave Foster shakes his head as he rereads the letter from Dr. House.

“Some people hate coming to the hospital. But when we come to IU Health we have joy. We are so thankful for the great care,” said Foster. His wife added: “We’ve been the most remarkable and positive experiences. Our journey shows you can’t take anything for granted but you can stack the odds in your favor with top medical care. Be grateful and appreciate life.”