He’s sitting in the IU Health Neuroscience Center with three huge pies next to him – butterscotch, coconut cream and peanut butter.

Jim Pickett has been up all morning baking those pies from scratch. It’s a diversion from his normal morning routine – which he does every day, except for Sundays. He has two church services to attend on Sundays, one Methodist and one Presbyterian.

About 8 a.m. the rest of the week, he shows up at the diner in Brazil, Ind., to meet a group of friends, eat a bacon sandwich and have some coffee.

Then, he heads to Hardee’s for coffee with his “old buddies” at 9:30 a.m. Finally, Pickett meets another group of pals at McDonald’s around 11:30 a.m. and has a warm blueberry muffin.

Most days after that, he goes to the grocery store to snatch up deals. He talks proudly about the 10 pounds of butter he just bought for less than $3 each. And the 12 dozen eggs he got for a steal.

Pickett, now 80, has been to Las Vegas twice in the past year and to California. He cooks a lot — sausage, green beans, potatoes, corn bread, deviled eggs. He just attended a big festival of trees. And he soaks in every single minute of every day.

Pickett has a new lease on life, a second chance, as he sees it. After all, it was one year ago that he was having life-saving surgery after what could have been a deadly fall from a pine tree. 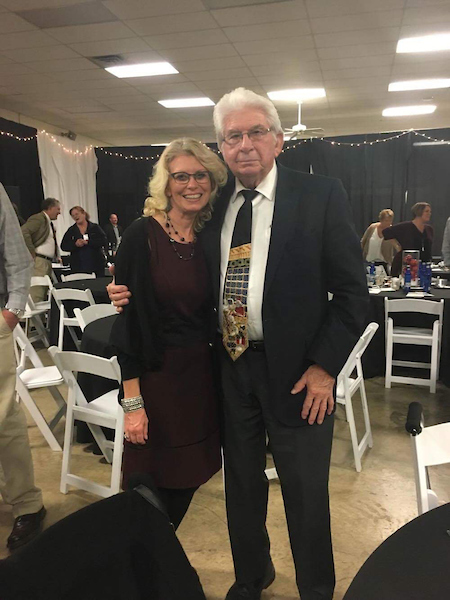 Pickett’s neighbor and his dog, Bridget, found Pickett that day lying on the ground – after a 50-foot fall from a pine tree — a chainsaw still hanging in the branches.

He probably should have died. Pickett broke his back in four places and broke 13 ribs. And he was 79 years old.

“Patients with his type of injuries, with as sick as he was at that time, to have a patient survive that is surprising,” says Richard Rodgers, M.D., Pickett’s surgeon at IU Health. “Is it a miracle? I don’t know. Deciding miracles is above my pay grade. It is out of the ordinary, for sure. He definitely has beaten the odds.”

Pickett thanks Dr. Rodgers with a homemade coconut cream pie. He’s baked 492 pies in the past five years, since his wife of 51 years died of pancreatic cancer.

Then, with an ornery chuckle, Pickett asks Dr. Rodgers if he can keep up his tree trimming business.

“You can go back to the business as long as you’re the guy bossing people around,” Dr. Rodgers says. “We can’t have you climbing trees. No more trees, no more ladders.” 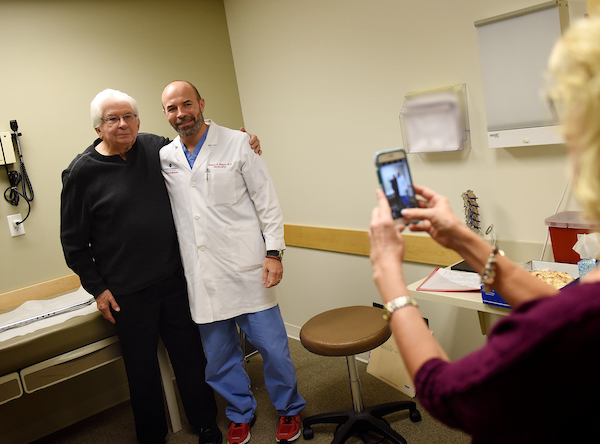 Of course, Pickett has no desire to trim trees. Outside in the waiting room before his appointment, he made that clear.

Larissa Goshen smiles as her dad talks. She can hardly believe it’s been a year. Looking at him now, she can barely believe there were days at IU Health Methodist Hospital that doctors thought her dad might not make it.

Goshen stayed by her dad’s side 65 straight days as he recovered.

When Pickett left Methodist, he went for 7 weeks of rehab.

Pickett then went to live with Goshen for five weeks. He came back to his own home on a weekend in March. The following Tuesday, he was in Vegas.

But, there was just one problem. The cane.

“I try to walk on the cane because it helps my back,” says Pickett, who was a hot dog salesman for 46 years until he retired at 70. “But it makes me look old. I think it dates me.”

That attitude, the one where Pickett says, “To me, I don’t feel 80. I still want to be 50,” is a glimpse of what got him into trouble in the first place.

He was 79 up in that tree, trimming it, despite his family’s requests to just hire someone. 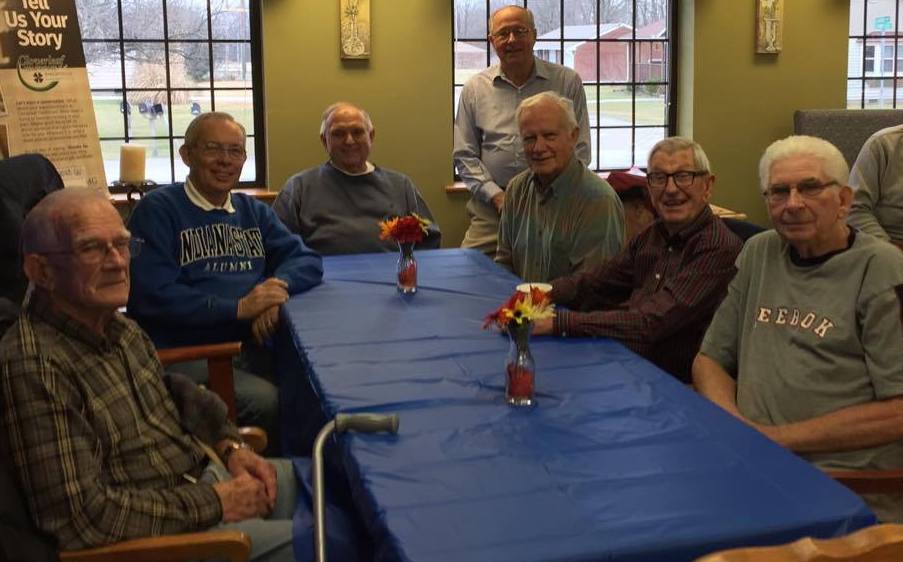 Pickett remembers cutting two limbs off. He remembers, vaguely, holding onto branches and smelling pine. And he vaguely remembers the helicopter’s whir as he was taken to Methodist.

And now, here he is back for his checkup. He gets weighed. The 50 pounds he lost in the hospital is back.

He gets X-rays and they look great, Dr. Rodgers tells him. The screws and bars on his back are still in place doing their job.

And he’s so thankful for that. He’s so grateful for everything people did for him, when he was down.

His daughter sticking by his side for nearly 10 weeks straight. His Hardee’s friends, who surprised him with a lunch at rehab. And the neighbors who were there to find him and stay with him until the ambulance came.

“It humbled me everything everyone did for me,” Pickett says. “I just feel lucky.”

Read more on Pickett’s journey a year ago: http://bit.ly/2zE8WVE

— By Dana Benbow, Senior Journalist at IU Health. Reach Benbow via email dbenbow@iuhealth.org or on Twitter @danabenbow.