In a month that he celebrates his 52nd birthday, Dr. William C. Goggins says: “It’s just a number.” He is referring to his birthday, not his professional milestone. Today he also performed his 2,000th kidney transplant at IU Health University Hospital.

“He’s awesome. Dedicated and a no-holds barred, in-your-face real life hero,” said patient Doreen Lamar, who received her kidney transplant in 2013.  “When you go into battle, he is someone you want leading the charge. He is honest, straightforward and doesn’t sugarcoat anything, but he will never give up on you. His patients are his number one concern.”

Goggins, who serves as surgical director for the kidney transplant program came to IU Health in July of 2003 and still remembers his first transplant surgery.

“He was a 65-year-old male diabetic and a Jehovah Witness. I believe he lived 10 years after his transplant and died of something unrelated to kidney failure,” said Goggins. “I tell people my job is to make sure when you die, you die of something other than kidney disease.”

On Tuesday, Dr. Goggins chatted with patient Julie Brophy just minutes before she received his 2,000th transplant. In 2001 Brophy, diagnosed with IgA nephropathy, received her first kidney transplant at another hospital. Her husband of 17-years, Patrick Brophy was her donor. When that kidney failed in 2006, she began dialysis. Going into surgery with Dr. Goggins, Brophy said she is looking forward to feeling better and playing sports with her 7-year-old son.

“I hit the jackpot with this kidney, IU Health and Dr. Goggins. I am ready to feel better and enjoy life,” said Brophy, 45. Her transplant surgery was a little tricky, but Dr. Goggins said it’s those types of procedures that keep him focused on becoming a better surgeon.

“The unique thing about most transplants is they are pretty standard. He prides himself on following procedures and then adapting to each patient,” said nurse Elizabeth “Diana” Liska, who has been in the operating room with Dr. Goggins for more than 1,000 transplant surgeries. “Between his amazing taste in music (he listens to a lot of funk and rock in the operating room), his outspoken personality, and his dedication to his patients, he is one of the most likeable surgeons I’ve ever met.”

Over the years Dr. Goggins has experienced a number of tough surgeries that will stay with him a lifetime. He says each patient reminds him of his focus to continually learn and improve.  His 2,000th transplant is symbolic of a career high that represents a new lease on life for those suffering from long-term kidney disease. 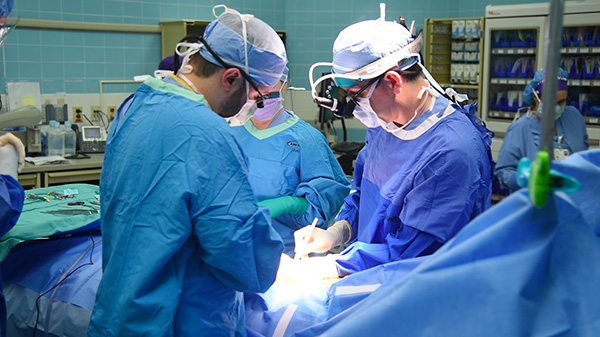 “You always carry with you the ones that didn’t go so well. It may having nothing to do with you – technically, medically, or physiologically – but you sort of carry that around until they can be re-transplanted,” said Goggins. “As a surgeon, I am my biggest critic. That’s how you become good at what you do. You are constantly re-evaluating and trying to become better.”

Goggins was a sophomore in high school, growing up in central Massachusetts when he knew he wanted to pursue a career in medicine. He shadowed his mother, a nurse, to a blood pressure clinic and reflected on her caring spirit.

“She instilled in me the idea that you have to care for your patients like you care for your family. If that means getting out of bed at 3 in the morning then you get out of bed at 3 in the morning.” His mother passed in 2008 and his father, a former newspaper journalist, passed this month. Goggins has a brother, 11 months older, and two younger sisters.

After college he attended St. Louis University School of Medicine and completed his fellowship in transplant surgery at Massachusetts General Hospital and Harvard Medical School.

“When she was thinking about going into medicine I was not one of those parents who tried to talk her out of it. I love medicine. I love what I do. I told her ‘you have to really want to go through the process and be willing to sacrifice your personal time because there will be difficult times,’” said Goggins. “I also told her ‘don’t decide what you want to do because of a lifestyle; decide by what you are called to do because if you love your work, it’s not work.’”

He’s seen much in his career spanning 2,000 kidney transplants.

“When I first started, patients over 55 weren’t candidates for transplant. Now we’re transplanting patients in their 70s.” His oldest patient is 83. Additional testing over the years has led to more knowledge about potential barriers to transplant.

“For instance people with antibodies. We now can look at antibody levels with a particular patient and look at low levels and transplant with a low chance of having a problem. You could never have done that 15-20 years ago.”

Paired donor exchange has also made transplants more accessible by entering incompatible living donor pairs into the exchange to find a compatible donor. Dr. Goggins was one of the surgeons involved in Indiana’s first kidney donation chain in 2009, which involved eight individuals and led to four people receiving lifesaving kidneys. Through the National Kidney Registry’s Remote Donation Network and Advanced Donation Program – both offered at IU Health – living donors can provide a kidney for an intended recipient or can donate to ensure their intended recipient receives a kidney in the future. Also new are transplants from high-risk donors (those with questionable health issues). New medicines can minimize those risks and improve a kidney recipient’s chances of better health more than if they continue living with kidney disease, said Goggins.

Such advances have shortened the wait time for patients and have also increased the chances of successful transplants, said Goggins, who is a registered organ donor.

“I tell people when tragedies happen and a family has been rocked by losing a younger sibling or an older parent, it’s an exceedingly difficult time, but the one great thing that can come out of a tragedy is organ donation. A loved one lives on.”

“I love transplant surgery because you are part of the healing process. If you do an operation well, patients are restored to normal kidney function and they get their life back,” said Goggins, who performs the vast majority of the 200 transplants recorded each year at IU Health.

“The average transplant surgeon completes about 50 transplants a year. It’s nice to think of the 2,000th transplant but I look at it like this: It makes me feel good to do something that few people do and I can help so many people. We all have gifts and talents and mine just happens to be putting kidneys in people. I’m one of the luckiest surgeons in the country because I have a spectacular team in the operating room as well as the team that takes care of patients outside of OR. They are all just as dedicated as I am to taking care of our patients.”