Danielle Jenkins was 24 – just five years shy of the age her mother was diagnosed with breast cancer.

“Twenty-four was the age that I knew I had to do it. I couldn’t wait. I couldn’t wonder. I couldn’t worry,” said Jenkins, now 25. In February 2015, a month after she was engaged to Zachary Jenkins, she made the decision that only she could make. She underwent surgery to remove both her breasts. Her hope was that she would reduce the risk of becoming one more female in her family diagnosed with breast cancer.

Jenkins was 22 when her mother, Stacey Benamon, who was 42, died of breast cancer. An Aunt, Stephanie Mohn, also died of the disease at age 48. Her grandmother, Phyllis Dunlap, was also diagnosed with breast cancer but is now in remission.

“A week after, my grandma was diagnosed and another one of my cousins was diagnosed – we were all tested for the (BRCA mutation) gene, said Jenkins, a nursing graduate of the University of Indianapolis. “We didn’t have the gene, but because breast cancer was so prominent on the family tree, I had a double bilateral mastectomy.” 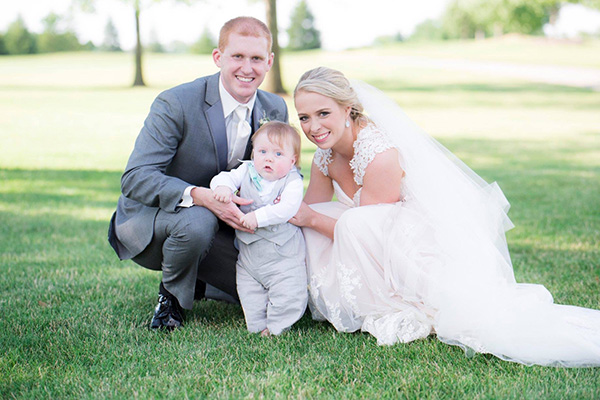 Jenkins saw her decision as a risk-reducing surgery.  She saw it as a way to minimize her chances of developing the cancer that had already touched her life deeply through loss of her beloved family members.

“Everyone thought it was like it was amazing that I did this, but I always knew I’d do it. I talked to a doctor when I was 15 or 16 and I knew this was the best path for me to take. It never seemed like an option. There was not a huge risk in doing the surgery and I felt there was a bigger risk in not doing the surgery,” said Jenkins, the mother of a little boy, Owen, who is nearly a year old.

Jenkins knew going into the surgery that based on her family history, surgery may not eliminate her risk but it gave her better hope for the future.

Jenkins doesn’t remember a lot about her mother’s fight but she does remember the ups and downs of the chemo infusion.

“She’d be tired one minute and have a burst of energy the next. She was eating like a rabbit and losing weight.”

It’s a memory she experiences firsthand as an oncology nurse.

“I was skeptical about going into oncology at first because it’s so close to home but I fell in love with it.”

Jenkins tells stories about a patient who drove four hours for treatment and got up early enough to bake her a homemade apple pie. “It was the best pie of my life,” she says. She understand that most patients want to think beyond their diagnosis, so she once turned a patient’s bed so he could see the fireworks outside his window. Another time she moved a patient to see the fish tank, and another patient to see the downtown skyline.

“I do get attached and I’ve learned a lot from my patients,” said Jenkins. “I love to hear their stories, especially when they say, ‘do you want to know my secret to life?”